Public access golf losses in Australia are continuing to mount, as Victoria Park in central Brisbane enters its final month in operation as a public golf facility.

Victoria Park was first established as a 9-hole golf course back in 1931, and has serviced public golfers in the Queensland capital for more than 90 years. The 18-hole, par 65 golf course is accessible to all who love the game, and affordable as well with Tuesday green fees less than $20.

Despite the strong social, mental and physical benefits golf brings its participants, the current Brisbane City Council has decided to terminate the golf lease and convert the 45-hectare Victoria Park site into a park. Work will apparently begin July 1, to fill in the bunkers and plant out the playing corridors. There is a new public access course being constructed in suburban Brisbane at Cannon Hill, but the opening of that course is not likely until next year. The Cannon Hill course is unlikely to be as accessible for city golfers as Victoria Park, and certainly unlikely to be as affordable.

Losing Victoria Park in the heart of the city will surely sting public golf, and should concern all involved in the game here in Australia. The game simply cannot survive and thrive on high-end private club golf and destination courses alone.

Victoria Park Golf Course will open for public use as parkland in a matter of weeks, as preparations begin to revamp the grounds into a 45-hectare park.

Lord Mayor Adrian Schrinner told ABC Radio Brisbane the golf course would close at 5:00pm on June 30, with the public to have access the following day "to enjoy, be it walking, cycling or having a picnic".

"We'll [then] commence the transformation of the golf course into publicly accessible parkland," he said.

"If you enjoy playing golf at Victoria Park, get in over the next five weeks, because it will be the last opportunity to play on the 18-hole golf course."

The driving range, putt putt course and function centre on the grounds will remain open.

The course and clubhouse opened at Victoria Park in 1931. Council announced in 2019 that it would transform the grounds into the city's biggest new park in 50 years.

"It's something the community has been really supportive of ... there's been more than 16,000 people that have had their say, and the feedback has been overwhelmingly positive with 86 per cent support for the transformation," Cr Schrinner said.

"Initially residents can expect to see the 33 existing bunkers on site filled, pathway improvements made and increased planting on site."

Community consultation on the draft master plan for Victoria Park will be held in the second half of this year. 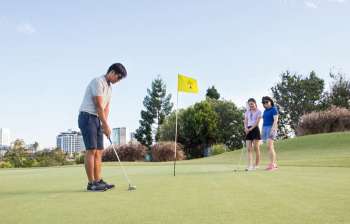