Matt Jones is a two-time Emirates Australian Open champion and that can only feel good.

The 39-year-old Australian joined the likes of Gary Player, Jack Nicklaus, Greg Norman and Peter Thomson as a multiple winner of the Stonehaven Cup when he held off South Africa’s Louis Oosthuizen by a shot in a magnificent finish to the 104th championship at The Australian today.

It augments the title he won at the same venue – his home course – in 2015. Adding to the sense of déjà vu, he had a similar putt of just more than a metre to win the Open today, and lipped it in via the left edge.

“No, I like to make it interesting,” he said, with the wry smile of a satisfied man. “It couldn’t have been an easier putt, this one. The first one (in 2015) I didn’t really know the read. This one I could hit it as firm as I wanted. It could have hit the right edge and it would have gone in. But I thought I’d hit it pretty soft and just trickle in the left side.’’

He is the 19th man to win multiple Australian Opens, and he was embraced by his family – wife Melissa and daughters Savannah, Saber and Simone – on the 72nd green before an adoring crowd, many of them well aware that Jones is a Sydney boy who made good in America.

“To be on the trophy with Jack and Gary and Greg and Adam (Scott), Rory (McIlroy), Jordan (Spieth); to be able to do it twice is very special and something that I’ll be able to look back on later in life and be very proud of,’’ he said.

In 2015, he had come so close to missing his title-clinching putt that he arched back in utter relief as it dropped. This time, he managed a little fist pump after posting 69, his fourth round in the 60s.

The finish was befitting a storied championship. Jones, who started out with a three-shot lead, had looked unassailable for most of the day, especially once he rattled in a birdie putt from long range on the 17th green.

But Oosthuizen, playing one group ahead, conjured a sensational eagle at the par-five 18th to post 14-under overall, meaning that Jones at 15-under needed to par the last to win. It was the closest anyone had come to him all day.

Worse, Jones had a miscommunication with a reporter and thought that he only needed to make a bogey to win. Then the Australian turned his drive over into the left trap, and his punch shot from the sand hit a tree and dropped down into pine needles below. Calamity seemed possible. Reaching the green, Jones saw an electronic scoreboard that revealed he had to get his ball up and down.

Ultimately Jones did what he had to do. From the front fringe of the green he chipped beautifully, up to just more than a metre, and made the putt.

He’s never been a prolific winner of professional tournaments but in Sydney and in particular at The Australian, he’s a world-beater. He led from partway through the second round until he breasted the tape.

“Something like this has been coming and it’s very special when it’s your national Open and to do it two times in a row is something that’s pretty unbelievable right now,” he said. “But I’m going to build on this. If I can play as calm on the US Tour as I did these four days, I think I’ll have a very good year.”

Oosthuizen was superb, shooting a 66 and proving his bona fides a few days out from the Presidents Cup. Queenslander Aaron Pike (69) and Japanese amateur Takumi Kanaya tied third at nine-under, a full five shots farther back. Veteran Greg Chalmers (67) was in the group at eight-under, along with American Cameron Tringale and England’s Paul Casey.

Jones, Pike and Kanaya all locked up starts in the Open Championship at Royal St Georges next year.

The Australian Open moves to Kingston Heath next year. 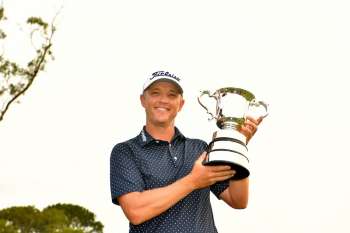