Not even the eerie, sepia-toned light and smoky air of The Australian can stop Matt Jones. He’s in his field of dreams this week and he’s leading the Emirates Australian Open. Again.

It’s the place where he made himself into a star, having joined the club in his teens and played pennants before moving to America to follow his calling. As a seasoned professional he won the Open here in 2015, the greatest triumph of an excellent career, and he was runner-up to Cameron Davis in 2017.

Jones likes to say that the remodelled Australian, tweaked by Jack Nicklaus in 2013, is not so familiar to him since by the time that happened, he was long domiciled in the United States. He also says that he doesn’t play here often. But the fact is, he doesn’t need to.

Put the Open at The Australian and Matt Jones will always be a chance. Not only that, he’ll still go under everyone’s guard, with his low profile and his quiet way.  “I actually prefer it that way,” he said tonight, when he was asked about his lack of publicity or fanfare.

Jones jumped out of the pack late on another hazy day and by the time he hit the fringe of the par-five 18th green in two and two-putted for birdie, he had a 65 that put him on top alone at 10-under par.

The Sydneysider leads by a shot from England’s Paul Casey (65 today) and another New South Welshman Dimi Papadatos (66), who is backing up his runner-up finish from The Lakes last year with another strong performance.

The pack at eight-under has an international feel, with South African Louis Oosthuizen, first-round leader Japan’s Takumi Kanaya, American Cameron Tringale and New Zealander Denzel Ieremia. Also in that group is Queenslander Shae Wools-Cobb (65), a 23-year-old asthmatic who has played well despite the challenges of playing in these unique conditions.

Among the big names to miss the cut were Australia’s top-ranked player, Adam Scott (even-par) and Spain’s Sergio Garcia.

Marc Leishman (67) had a good day and at six-under, remains in contention for a first Australian Open title, while Cameron Smith suffered the calamity of a triple bogey six at the par-three 11th when he tugged his tee shot left and into heavy scrub. “Those bushes have got a bit of a magnet for my ball,” said Smith, who is at two-under.

The smoke haze came and went with the light breezes, and Jones felt his eyes stinging and his throat complaining too.  “Yes, I would definitely say there were some big leaves out there that were burnt.  It’s not the easiest to breathe, our eyes have definitely been stinging quite a bit.  I’ll be happy to get inside and get in the air conditioning.”

For Jones, playing the Australian is about knowledge. It’s about knowing where he can afford to miss, and where he can’t. He plays famously fast, by his own estimate in the top three on the US PGA Tour. But it’s always been that way.

“I get a number, I know the shot shape I want to hit and I’ll hit it.  The less time I have to think about things, I’ll have a couple of swings before I hit a shot to get a feeling and I try to go as fast as I can to keep that feeling into the golf shot.  But, I’ve always been fast and it’s just my routine.”

Jones will play alongside Casey and Papadatos today and he will relish the experience. “Any time you get to lead is fantastic,” he said.  “It would have been better to be more in front, but I’ll take one in front.  Still a long way to go.  I’m sure the wind is going to pick up the next two days, which will make it a little tougher.” 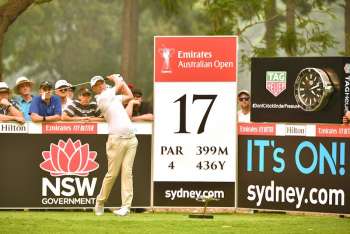