The Jockey Club is Argentina’s premier private golf club, having been established in the 1930s with the completion of two Alister MacKenzie designed courses, Red and Blue.

This is a fascinating club for MacKenzie fans to study, as this was certainly his flattest and dullest property yet there remains evidence of his unquestionable design genius across both tracks. The best aspects here are the greens, the Red layout a slight favourite ahead of the Blue because it has more length and a marginally more impressive set of putting targets.

On land as flat as this MacKenzie had his work cut out to make the golf exciting, and this was largely achieved through the construction of push-up greens, false fronts and crested slopes. It seems a contradiction, yet somehow a great architect like McKenzie can make a short course with large greens a genuine challenge for all manner of player. Often here at Jockey Club you only have a short iron approach, but play to a green that falls at the front and leaves slippery downhill putts for those overcooking their shot. Often the targets feel smaller than they really are, principally because leaving your ball under flags or on the right portion of green is so desirable. Pin seekers need to judge distances perfectly, or risk making lots of soft bogeys.

Despite its good points, the Red Course routing is a little uninspired as most holes run north and south toward and away from the clubhouse. The 11th to 15th holes are the only ones that deviate, and these again simply run back and forth in an east/west direction, which seems strangely unimaginative for Dr. MacKenzie.

Without moving large amounts of earth, MacKenzie built a simple but strategic golf course, with greens like 2, 6, 10, 14 and 17 on Red that are true works of art. The 10th and 17th are the pick of the targets, each resembling the famous Road Hole green at St Andrews. The 10th is a reverse Road target, with an even steeper front, while the 17th is surely one of the smallest targets in golf, the par three likely to require your best efforts with a 5 to 7 iron into a thin green falling on all sides and with a deep centre left trap to swallow many balls. Of the other par threes, the long 8th and steep fronted 12th, are also very good. Most of the remaining greens are gently crested, or tiered to complicate and deceive.

Unfortunately, neither course at the Jockey Club has aged as well as we would have liked, chiefly because the club has planted so many trees but also because they haven’t managed the MacKenzie bunkers and green surrounds at all well. It’s still well worth a look, both for those who love the work of Alister MacKenzie and for those simply curious as to what all the fuss is about. 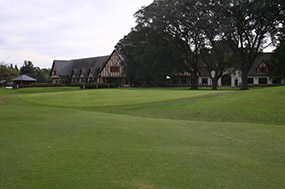 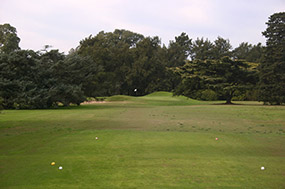 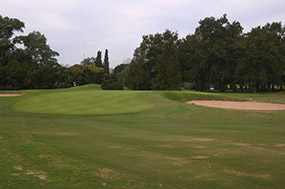