Situated within the attractive forests of the Springfield National Park, the beauty of the Brookwater Golf Club is apparent the moment you drive in here, as is the difficulty of the golfing test before you. Fairways cut tightly through tall trees, deep bunkers guarding small putting surfaces and plenty of length make this course, the first built within the Brisbane area since the 1970’s, among the state's most demanding.

Opening in 2002 and part of a residential subdivision, Brookwater contains a lot of ‘single holes’ that will eventually be flanked by a housing development that is sensibly kept a good distance from the golf corridors . The overriding objective throughout the project was to preserve as much of the bush as possible in order to provide an attractive setting for golf and to ensure that even when the estate is fully developed the housing will be barely noticeable. As a result the fairway corridors were kept deliberately narrow with the designers not wanting to remove a single tree more than necessary and choosing instead to shape the landing areas to play more forgiving.

Built through rolling forests of established Ironbarks and other tall Eucalypts the holes runs along valleys, steep gullies and up and over ridges with trouble lurking on either side of the enclosed fairways. The extremely undulating nature of the site lent itself to the design teams preferred method of classic style MacKenzie-esque bunkering. Bob Harrison stresses this was not done out of reverence to the great man but because ‘it makes the most sense if you believe in creating golf holes which look good as well as being interesting to play.’ The bunkering is big and bold with steep faces cleverly contoured to dominate the vistas and blend naturally into surroundings. Hours were spent on site with excavators setting out the shapes and then trimming and refining after the first cut so that each bunker was not only practical but looked exciting.

Like MacKenzie and Morcom a lifetime before them, bunkering has become the Norman/Harrison trademark. Artistic yet set within the parameters of the design’s philosophy, the hazards here are even more commendable considering the sites unsuitable clay base. Unfortunately, at the end of the day the Brookwater layout is a little too tight and a little too difficult to appeal to all golfers across the spectrum or to be regarded as a great course. It's certainly a good course, but unless you are an elite golfer, keeping your ball in play often means a great sacrifice in both distance and approach shot positioning. Low markers are the ones most likely to enjoy the challenge. 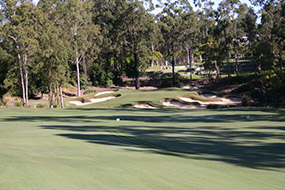 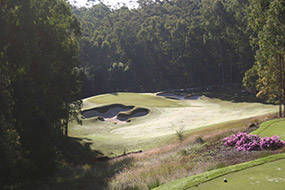 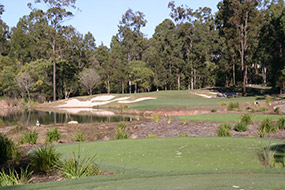