The Commonwealth Golf Club is a private members club. Visitors from Interstate or Overseas are welcome during certain periods of the week. Such visitors will need to be members of a recognised golf club, with a current membership identification card or a letter of introduction from the home club. Contact Planet Golf for assistance with tee times.

Like a number of Melbourne’s famous clubs, the Commonwealth Golf Club was founded by frustrated members of a clay-based city course who, in the 1920’s, decided to move to the prospering southern Sandbelt. Inaugural professional, Sam Bennett, designed the first twelve holes before club Captain Charles Lane completed the rest and touched up the greens and bunkers. Unusually for its vintage, the layout then evolved primarily without the aid of high-profile, high-priced golf course architects, but instead thanks to a long history of sound internal club management.

What club pioneers created was terrific and based around the strict adherence to the simplest values of strategic design. Beautifully bunkered and exquisitely built, the tilted greens were designed to favor players who can approach from the best angles, with the fairways then shaped to create clear choices from the tee according to one’s ability and ambition. This design philosophy is best highlighted on the superb par fours. The famous 16th, for instance, bends left around a fairway lake and features a slippery green that is guarded by a fearsome right side bunker and angled to only reward the brave golfer who can drive close to the water.

Another standout, the mid-length par four 11th is played around corner bunkers before heading uphill toward a large, tiered green that has a steep slope and is flanked by deep sand traps. The closing stretch is also outstanding. Following the brilliant 16th comes a tremendous short par four, which rises gently to a sharply contoured green that is devilishly difficult to pitch into from the wrong angle. The 18th is then a strong par four, its modern length and classical bunkering making it an ideal finish to the round.

For many decades the members acted as custodians of their course, successfully able to maintain the integrity of its timeless design in-house. The greatest period of reform came during the 1960’s when additional land allowed long time club Secretary Sloan Morpeth to redesign the 10th and 11th holes as well as a number of green sites. Strangely in the 1990’s the club abandoned its internal management policy and embarked on a program to ‘modernize’ the layout. First came the loss of the beloved driveable opening hole, which was fondly remembered but underweight according to a committee who added length and created a dogleg. Architect Kevin Hartley then built a new par three to replace the popular short 7th hole and added a further 200 meters to the length of the course. An extensive tree planting program was also continued which has caused some problems with overcrowding and intruding limbs interfering with the line of play on several holes.

Commonwealth’s continued success can be directly attributed to the design philosophies implemented by its early members. Although modern changes have done little to improve the experience, the contemporary course still has a stack of wonderful moments as well as original greens and bunkers that are as attractive and strategic as any on the Sandbelt. 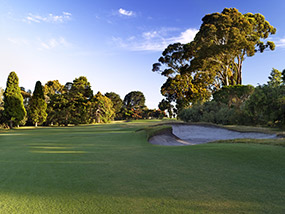 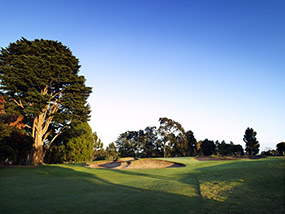