Originally founded as the Carlogie Golf Course, Eagle Ridge was born in 1989 following the acquisition of some additional land off Browns Road in Boneo and the redesign of the holes by amateur golfer Kevin Hartley. Hartley’s holes were later tweaked by Pacific Coast Design and its fairways converted to Santa Ana couch, but they remain largely intact.

The Hartley course is sadly one of the more disappointing on the Mornington Peninsula, thanks largely to an uninspired use of quite interesting terrain and a fixation on championship length, ultra-modern bunkering and fixtures like gazebos, garden beds and water features at the expense of core golf. A site this narrow and tight need never have yielded a par 72, 6,100 metre golf course, but this was the 1980s and a guy without the expertise needed to blend the natural with the artificial.

Excessive bunkering aside, the bigger issue here is the lack of width and strategy from the tee and the lack of genuine quality among the golf holes. On the positive side, the par threes are quite fine and a handful of the longer holes, such as the heroic par five finisher, offer golfers the chance to set up an eagle or birdie attempt.

Eagle Ridge has experienced tough times financially in recent years, and one hopes the course has a future and that owners can somehow address concerns with what might have been solid and fun golf holes. Turf conditions and general grooming here are usually excellent and the green fee is fairly inexpensive, so it does have fans and fulfils an important role on the Peninsula in attracting new players to the game. 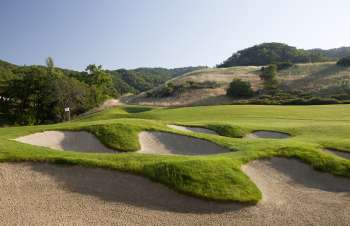