Indooroopilly Golf Club was established in 1926 with the original 18-hole course situated at St Lucia.

The club owes its existence to Bernard Boultbee, a young and enthusiastic accountant and Taringa Shire councillor, who instigated the first meeting to discuss the formation of a club at Indooroopilly. He subsequently became the club’s first patron.

One hundred and twenty four acres of freehold land at St Lucia were purchased from thirteen different owners for $17,000. The land included a homestead, part of which was retained to become the first clubhouse.Scottish-born professional golfer and course designer, Dan Soutar, was engaged to lay out the course at a cost of seventy-five guineas plus hotel and travel expenses.

On Saturday 3 July 1926 the first nine holes were opened by the Premier of Queensland, the Hon. W. McCormick. Celebrations continued well into the night, with members bringing their own gas lamps to light up the clubhouse after dark. It would be almost three years before electricity was installed.

At the end of 1926 the second nine was in play and the club had engaged the services of celebrated Scottish architect, Dr Alistair Mackenzie, to recommend improvements to the layout. Dr Mackenzie had just completed a major re-design of Royal Melbourne’s West Course and later went on to design Augusta and Cypress Point in the USA.

In the decade following World War Two membership more than doubled to 898, forcing the club at that time to put a ceiling on future applications. With a 15-year waiting list for membership and demand still increasing, the club purchased 140 riverside acres at Moggill to build an 18-hole championship course.

Plans for Moggill were shelved in 1962 when the Brisbane City Council called tenders for the lease of an area of Sir John Chandler Park at Long Pocket – only three quarters of a mile from the St Lucia clubhouse – to be developed as a sporting and recreation area. Because of its proximity the club submitted a tender and obtained a 21-year lease of about 180 acres.

Sydney course architect, Al Howard, designed an 18-hole course and head greenkeeper, Jack Surman, directed most of the course construction. A modest clubhouse was completed and the new complex was opened by the Lord Mayor of Brisbane, Alderman Clem Jones, on Sunday 8 March 1964. The club and ball used by him are displayed in the present clubhouse outside the entrance to the Poinciana Bar.

In 1973 the club agreed to exchange the St Lucia course and clubhouse for 200 acres of freehold land adjoining the existing Long Pocket layout on which another 18 holes with a new clubhouse could be built. At the same time the lease of the original 18 holes at Long Pocket was extended to 2058. It would, however, be twelve years before the transition was made, such was the scale of the scheme.

Architect, Bob Green, from Sydney was appointed to design the new complex in 1976. This was to include changes to the existing course with four loops of 9 holes, each returning to a central clubhouse.

So at the end of 1985 club members and associates said goodbye to the “Grand Old Lady”. The excitement of the move to the new complex with its longer and more challenging courses and palatial clubhouse was tinged with sadness in leaving a venue steeped in tradition and happy memories.

Indooroopilly has seen some famous golfers grace its courses over the years, including Walter Hagen, who won 11 majors in his career, Gene Sarazen (seven majors), Bobby Locke (four) and Gary Player (nine). We have also welcomed American, Babe Didrickson, arguably the greatest woman athlete of the time. 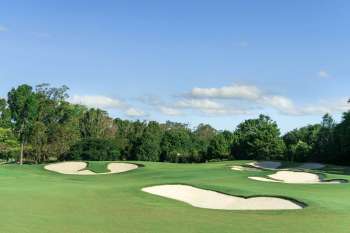