‘This special site produces one of the great golf courses in the game’ Robert Trent Jones Jr.

Joondalup is one of the most unique golf resorts in Australasia, built around an abandoned quarry it was created by the design company Robert Trent Jones II who used the natural bush, dune and quarry landscapes to create twenty seven eye-catching golf holes.

The course is set out in three loops of nine, the Quarry, Dune & Lake, with the distinct terrain of each nine making it hard to select a coherant composite 18 and difficult to compare Joondalup with other courses in the country. The prominent features of the site are the magnificent cliff faces and limestone quarries, which actually come into play on each nine but are especially prominent on the Quarry course. The par three 3rd is the most notorious hole with a full carry of the enormous quarry required to avoid reloading. Visually intimidating from the tee, anything short or right is lost forever, while those who bail-out to the left side of the 800 m2 green invariably end deep in three-putt territory.

A double dogleg par five follows with the final third of its fairway played over and around an 80 metre sand hazard at the base of a 10-foot cliff. You need a ladder to climb into this bunker and a prayer to get out. The options for the second shot are to lay-up short of the sand or attack the cliff, the aggressive play needing to bite off enough of the hazard to reach a plateau fairway. The reward for the successful gamble is immense but the hazard colossal, making this one of the more exciting play-to-position shots in Western Australia.

The most remarkable feature of the Dune course is its incredible elevation change, although it also includes a couple of nice quarry holes. Once described as an ‘overzealous mutation of parkland and links’, the stomach tends to get a little queasy when driving down the massive roller coaster fairways, but the pumping heart can still appreciate the enormous scale of its design. The fourth is a long par three dropping severely from a cliff top with an elevated back ‘Tiger’ tee that comes highly recommended as it provides a stunning outlook over the greater Joondalup precinct. The view alone is worth the double bogey!

The more open and less dramatic Lake course was added to the roster in 1990. With glimpses of the Indian Ocean and the odd green open to a bump and run approach shot, it’s almost a traditional links when compared to the other nines. In truth the unusual mix of holes play nothing like a links, with man made water hazards, flashes of the quarry and a series of adjacent holes featuring huge split fairways, extravagant bunkering and wickedly sloping greens. The short par four 2nd, set against a cliff, is the pick of the Lake holes.

Unless a total bandit, do not contemplate playing anywhere near your handicap on the first visit to Joondalup as all three courses are particularly brutal on newcomers. Steep tees and elevated greens with dipping fairways make correct club selection extremely difficult. Short balls often trickle off the greens and back down the fairway towards the frustrated golfer while the enormous greens (up to a ¼-acre) are heavily contoured with plenty of slippery breaks so those who overcompensate on the approach usually leave themselves terrifying putts. With each round you learn more about the course and the challenge does get progressively easier.

While purists might find Joondalup a little difficult to digest, for many the tantalising combination of extravagant design, sumptuous resort facilities and fabulous natural landscapes is irresistible. Either way, this is a much loved course in Perth and certainly one of the more interesting golf destinations in Australia. 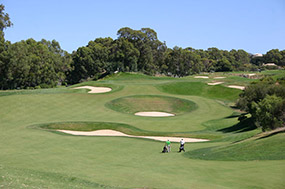 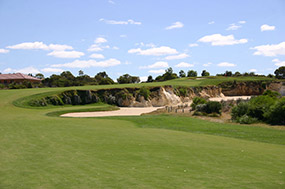 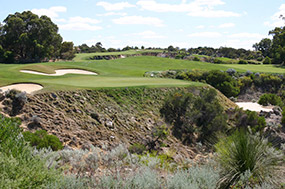 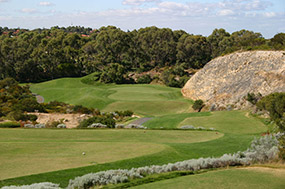