Australia’s largest outback city, Kalgoorlie, in the West Australian goldfields, is best known by many for its enormous Super-Pit mine, its historic pubs and its skimpy barmaids. For golfers, the principal attraction of this dusty, desert region for decades had similarly been its Super-Pit mine, its pubs and its skimpy barmaids. Things changed late last year, however, with the opening of the $18 million, Graham Marsh-designed, Kalgoorlie Golf Course, funded partly, and now owned, by the city itself.

The Kalgoorlie Boulder township was first established back in the 1890s, when gold was discovered by an Irish immigrant named Paddy Hannan. Hannan’s discovery led to an influx of prospectors and the establishment of a mining industry that remains the lifeblood of the area today. Known as the ‘Golden Mile’, it’s said that the Boulder/Kalgoorlie precinct is the richest square mile of gold-bearing earth in the world.

While these are undeniably fertile grounds for gold miners, in Kalgoorlie the earth is about as arid and inhospitable for golf as one could possibly imagine. This was especially true of the property selected for the area’s first ‘proper’ golf course, which incorporated an old tip site a kilometer or two from the city centre. Aside from the actual garbage dump, the red earth here was not only pancake flat but completely parched. Growing grass would be a challenge, but so too would shaping the desert into something that resembled a genuine golfing test.

Prior to the building of this new golf course, there were three established clubs in Kalgoorlie, each playing on layouts that were without grass and virtually devoid of any natural feature. The benchmarks here were clearly low, but the ambition from council was very high. They had first floated the idea of a ‘real’ course for the town more than decade ago, but their initial design brief was both impractical and overly ambitious. It called for 36 holes to be squeezed onto the tip site, which would have meant virtually all of the native vegetation being removed. Few golf designers were interested in the job, so the elected officials shelved their plans.

Several years later a private investor from Perth took another look at the project, and this time invited Graham Marsh and his team to study the land and make recommendations on its best use. Marsh, who was born in Kalgoorlie, was appointed course architect, but when his client ran out of money during construction the project was suspended. To the surprise of many, a few months later the State Government and the City of Kalgoorlie-Boulder formed a partnership and jointly contributed the millions needed to complete the golf course.

Part of the reason for the town’s interest in this project was a belief in the tourism benefits a fully grassed championship course would bring to the area. The council also wanted to rehabilitate the dump site which, as Marsh himself explains, ‘had to be layered with a metre of compacted fill, because the tip site had been there for many, many years and they wanted to get rid of the problem.’ During construction more than half a million cubic metres of material was moved on site, with most of the earthwork done to cover the tip. Covering the dump allowed the designers to introduce elevation into some of the finishing holes, but it also forced them to push dirt around on the opening nine as well so the two nines would meld together cohesively.

What’s instantly striking about this golf course is the contrasting colours and how rustic and natural everything appears. Each hole is cut straight from the dusty, outback, with off fairway areas deliberately rugged and unkempt. Unlike in places like Arizona and the Middle East, where the desert areas are often manicured, here everything is completely untouched - miss the fairways and your irons will age very quickly. The construction team (McMahon’s of Victoria) did a solid job building these playing areas, and made a great fist of the important finishing touches. The dry gullies and floating desert tee boxes are superbly carved into the landscape, while the periphery shaping and the use of onsite materials to create steps, paths, cart fences, bucket stands, tee signage and other fixtures is quite brilliant.

In terms of design, those familiar with Marsh courses elsewhere in Australia will note the familiarity between Kalgoorlie and his other recent tracks like Twin Creeks in Sydney, most noticeably in terms of how the bunkering is arranged. Like at Twin Creeks, Marsh and his team opted for large, multi-bay bunkers with rounded shapes and smooth surrounding mounds. Most work effectively from a strategic perspective, as do the majority of the pushed-up green sites, which appear at times to be used to help disguise the flatness of the virgin terrain.

Less effective are the sculpted desert waste areas used on holes 3 and 11 to artificially pinch playing corridors, and create a point of difference from the formal bunkering. There are also a couple of overly contrived green complexes, such as the 5th and 11th, and a few rounded mounds that appear misplaced, like those surrounding the experimental green site on the par four 7th. Featuring a central furrow and high flanking tiers, the putting contours here appear to dictate a chasing approach, but a hump placed in front of the green forces the aerial route instead.

On the positive side, the use of a dry wash on holes like the 6th and 12th is strategically very sound, while the creatively contoured target at the long par four 14th and the falling par three 17th, with its bold green and distant outlooks, are both tremendous. The short 4th and 13th holes also work well, as does the lengthy, right bending par five 2nd. For me, the standout feature of this course, however, is the triple tier green at the par five 9th, which collapses dramatically away from the approaching golfer from a high front section down to a middle and bottom shelf. This might be the most adventurous and daring green site that Marsh’s company has ever designed, and local golfers will quickly discover that the only way to attack middle and lower pins is by feeding balls down the slope from the front of the green.

It’s likely that visitors to Kalgoorlie will be divided over the severity of the 9th green, and also the difficulty of tackling this test from the very back tees. At more than 6,760m from the tips, this is one of the longest courses in Australia and Marsh acknowledges that it was built long because of the brief given to his company by the council. As he pointed out, ‘they (the council) wanted a championship golf course, that potentially could have a major event at some stage to test the best players in the world. So they wanted a true championship test and length becomes vital in terms of what most people recognise on a new golf course as being a championship test.’

Despite the distances listed on the scorecard, the couch fairways were designed to be firm and hard running, and the majority of golfers will rarely play these holes from the very back markers. The biggest concern with unnecessary length is the additional cost, but Marsh is adamant that this wasn’t a problem at Kalgoorlie. ‘Getting that extra couple of hundred metres was really not a big issue, even in terms of costs’ he says, ‘because of the isolated tees we have, and because the fact it runs on a fairly linear pattern so the irrigation lines were going past those back tees anyway.’

While Marsh was quick to point out that his design team commits itself completely to every client and every golf course they work on, he did concede this project was one that he was particularly fond of. ‘Obviously with Kalgoorlie it was a project that was special because I was born there’, says Marsh, ‘and it is probably Australia’s first true genuine desert golf course. It was unique in that regard. It’s also unique in the fact that it was built in Kalgoorlie, which for all kinds of reasons has been rather an iconic town in Australia. The other thing that made it special, is being one of the few golf courses built in Australia in recent times that have had the support of the state government and of a council.’

When devising his routing plan for Kalgoorlie, Marsh allowed space for the present holes to link up with a second course should the council ever decide to acquire additional land and expand the facility. The current layout flows reasonably well, although there is an excessively long walk (or drive) between the 9th and 10th caused by the need to accommodate the finishing holes on any future layout. To be honest, expansion seems light years away at the moment, and council is rightly focused first on completing its clubhouse, establishing a state-of-the-art teaching facility and then building a resort. Kalgoorlie is apparently in desperate need of more hotel beds.

While increasing tourism was clearly the motivating factor behind this development, one hopes that it’s greatest benefit will be to a community for so long denied access to a ‘proper’ grass golf course. Marsh agrees, and hopes that his course can have a positive influence on the quality of life in Kalgoorlie. ‘Having councils that are involved, that are keen to have a golf facility within their electorate, I think is a great thing for the game’ he said, adding that ‘more importantly, it’s all about the community, and what the golf course can do for the community.’

Golf, like life, is a game of choices and, as the designer astutely noted, ‘you have to meet that fork in the road sometimes, and when you grow up in a town like Kalgoorlie it’s very easy to go down the wrong road.’ Western Australia has produced many champion golfers over the years, and now that the game is a genuine recreational option for the youth of Kalgoorlie, it wouldn’t surprise if the state’s next ‘Golf-Rush’ started right here. 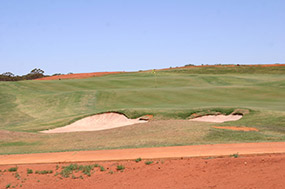 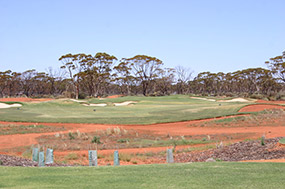 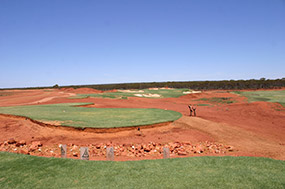 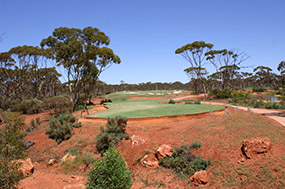