For the small population of King Island (approx 1,600 people) the 2015 opening of the Cape Wickham Links was a major boost both economically and socially. The course achieved almost instant acclaim, and helped shine the world’s attention onto this stunning island and its fabulously friendly locals. In truth, prior to Cape Wickham the island was well worth a visit already. Not just for the cheese, beef and seafood, but for the King Island Golf & Bowling Club, one of the most beautiful short courses anywhere on the planet.

Located in the main township of Currie, the King Island Golf & Bowling Club was formed in the 1930s, and the club’s 100 odd current members golf on an outrageously fun linkscape that is pressed right against the Southern Ocean and full of rollicking undulation and sea vistas from virtually every quarter. There are only nine holes here, but three feature alternate greens and seven boast alternate tees, meaning your second loop around is anything but boring.

From the opening hole, with its blind drive and hidden dell green, the charms of King Island golf are apparent. The next hole (2nd/11th) is one of the very best and although fully visible from the tee it’s no less daunting as play heads along dense coastal vegetation toward a bulging, angled fairway ridge that is more difficult to hit and hold the more aggressive one gets from the tee. The 3rd/12th then falls from an elevated dune down to a green resting a few metres before the ocean.

The next stretch resembles the best land at La Perouse (New South Wales Golf Club) in Sydney, for the nature of the terrain, the vegetation and the manner in which the dunes, the rocky coastline and the forgiving golfing corridors interact. As with the rest of the course, the shaping and finishing work here lacks the real quality of say the Sandbelt, but holes like the 5th/14th, which horseshoe around a rocky cove, and the 6th/15th, which head inland from the sea across a diagonal ridge to twin elevated greens, are both great fun. As is the 7th/16th, an enticing sidehill short four with a partly obscured green tucked behind a dune. The 8th/17th is then a wonderful mid-length hole played as a dogleg the first time around and then straight up a narrowing dune valley on the inward loop. Interestingly, the closing holes are different on each side. The 9th is a cunning short par four with a blind green deliciously placed in a natural saddle, while the 18th is an all-carry par three that heads into an unforgiving ledge perched beneath the lofty clubhouse.

As with any coastal links, the key to playing well at King Island is controlling your ball flight in the wind and accepting the odd funky bounce around the fairways and greens. There are some who may find the lack of a serious long par four and par five a turnoff, but mid-length holes like the 2nd, 6th, 8th and 17th in any sort of breeze can be brutal, especially given their small target areas.

Though conditioning here is not quite to the same standards as Cape Wickham, King Island golf course is maintained by volunteers and boasts an “honesty box” in place of cashier accepting green fees. The whole experience is unique and a genuine treat. Playing golf in Currie before or after your rounds at Cape Wickham makes a trip to King Island such a pleasurable experience. 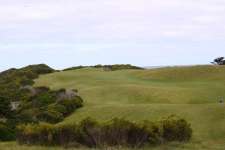 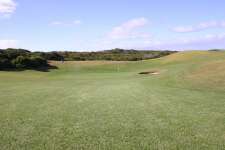 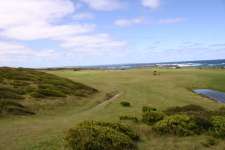 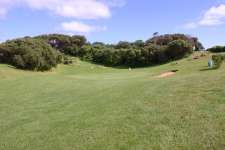