Built by a Japanese shipping company in the early 1990’s the magnificent five-star Laguna Whitsundays Resort is set amongst almost 2000 hectares of sublime coastal bushland along Queensland’s stunning Great Barrier Reef. An unspoilt paradise with a constant outlook over the beautiful Whitsunday Coast, the resort also comes complete with an attractive 18 hole golf course.

Designed by two-time major winner David Graham and American architect Gary Panks, the course and its most famous hole, the seaside 6th, are named after the outcrop behind the tee known as Turtle Point, where the turtles of the region annually come to mate. Taking golfers on an absorbing journey through bush and virgin rainforest, the course affords glimpses of the Barrier Reef and even runs alongside the tropical waters of Repulse Bay.

After a comfortable opening things start to get interesting at the 5th, which bends through thick bush towards a large green set beneath a crop of spectacular rainforest. The dense growth can be disorientating but as you head to the next hole, the forest suddenly opens up to present the glorious islands of the Whitsunday’s in full view from the 6th tee. A rock wall runs down the entire left side of the hole to separate you from the water, but nothing can interrupt this breathtaking vista. With the wind whipping in from the islands, golfers need to start their tee shot close to the Sea as an enormous bunker, that doubles as a cart path, runs the entire length of the fairway to catch the not-so-brave who bail too far to the right.

Tantalizingly the course then heads back inland with the coastal holes, for now, left behind. The next sea glimpse comes when standing on the 13th tee and is even more memorable, especially for first timers. The long par three heads straight from the forest towards the Reef and an enormous green framed by the islands that lurk in the distance. The final signature hole is the par five 14th which runs alongside the sea in much the same manner as the 6th hole. Interestingly both were built on reclaimed land with more than half of the earth excavated to build the entire course used to form these two holes.

Golf at Laguna Whitsundays isn’t all about views with a variety of holes playable to resort golfers and enjoyable for the single figure marker. Aside from the 13th the lily pond 4th and water carry 11th are also solid short holes, while the 12th is a nice par five and, together with 11, 13 and 14, forms part of the best stretch on the course. Though less dramatic, the closing holes are also very potent with the reachable par four 17th armed with water long and left for the overcooked hook and deep bunkers short and right to catch the weak block. Bending right up a steep hill, the tough 18th is another good hole.

Sadly the once-legendary conditioning at Laguna Whitsundays has deteriorated badly in recent years, with the 328 Bermuda grass fairways and greens suffering through the financial troubles of the resort owners. Fingers crossed it can turn things around quickly, as this resort has long been one of Queensland's most popular golf destinations and its loyal patrons deserve better.

** Sadly the Laguna Whitsundays Resort and its golf course closed in 2012. 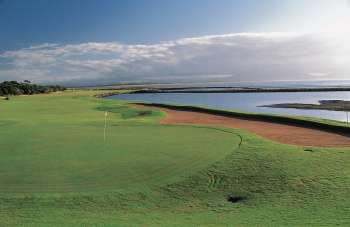 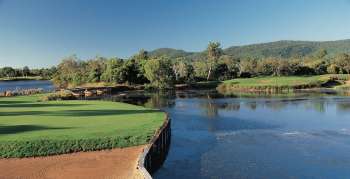