Shortly after announcing the closure of the popular and well located Victoria Park golf course in central Brisbane, the Brisbane City Council began construction on a new public access golf course in the city’s south, to be known as the Minnippi Golf Course.

Designed by Phil Ryan and Paul Reeves of Pacific Coast Design on an old tip site, the new course at Cannon Hill will be bunkerless but feature treated timber retaining fences as hazards. There will also be grassy hollows in place of traditional bunkers.

A key feature of the design is that golfers can play loops of 6, 9 or 18 holes from a central teeing zone around the clubhouse.

Designer Ryan said of the golf course, that it will be a “par 72 of 6032 metres with three holes over the old tip, three holes through the proposed residential area and the balance laid out along the flood plain adjacent to Bulimba Creek.

The golf course can be played as 18 holes, two nine-hole loops or as three six-hole loops. This will give the appointed managers as many options as possible for normal or twilight/speciality golf play.

The course moves from parkland golf across the first six holes into a more heavily tree-lined forest-like golf zone for three holes and then back to the parkland environment.

Holes 14-16 are set on the old tip site and as such are more open and play as a links-style and the final two holes return again to that parkland feel. It promises to be a fun golf course with lots of options for achieving par and which takes golfers on a journey through an enhanced environmental site with creeks and billabongs.”

Preview play is expected to begin in early 2022, with a full opening later that year. 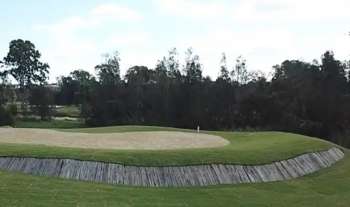