The Monash Country Club is a private establishment situated high on the hills above Narrabeen, approximately 21 kilometres from the centre of Sydney. It was named after Lieutenant General Sir John Monash, one of Australia's greatest soldiers, and started out as a Jewish Social Golf Club. The original members played their events on a number of different golf courses, before taking the decision in 1946 to establish their own course.

With a property purchased and a successful membership drive in place, construction of the new Monash course began in 1947 and was completed in 1950 when the John Herd Scott designed layout opened for play.

Aside from tree growth and the tinkering of various committees’ through the years, the Scott golf course has remained largely intact. Its primary weakness is the number of holes that bend against the natural shape of the land. These holes have become even more problematic with the growth of trees into playing areas and the fact that longer hitters can often bomb over trouble and into wider landing zones. There is a plan at present through architect Bob Harrison for some routing adjustment to the back nine, and the rebuilding and updating of greens and bunkers across the course. Harrison's first project was to rebuild the 3rd hole, and create a dramatic uphill par three across some fairly bold bunkers. Harrison's sensible plan to reconfigure the 12th, 13th and 14th holes has not yet been embraced by the membership, but would improve the course further.

Renowned for its quick bentgrass greens and well kept kikuyu fairways, Monash is a pleasant place to golf but a long way from the best courses in Sydney. 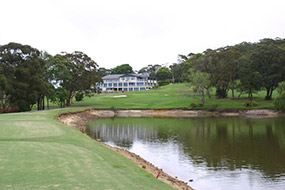 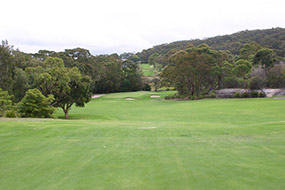