Moonah Links is a 196-hectare development down on Melbourne’s Mornington Peninsula that features a luxury resort, housing estate and two big dune courses designed by Peter Thomson and Ross Perrett.

While Perrett’s Legends layout is more playable, and for most more enjoyable, the centrepiece at Moonah Links is Thomson’s monstrous Open Course, a links-style stadium course purpose built among the sites expansive dunes to regularly host the nation’s Open Championship. Measuring a whopping 6,800 metres plus from the back tees, the difficulty of the links is further enhanced by a number of blind shots, large heavily shaped greens and evil pot bunkers which are scattered throughout the track and often hidden or placed in the middle of fairways to punish, with absolute severity, the golfer unable to navigate around them.

Built for tournament golf, but without any of the clever subtlety of Britain’s classic links, the par threes are all mid to long irons, five of the par fours exceed 400 metres and three holes stretch over 515 metres. Throw in the strong and constant coastal winds and you have one hell of a thorough examination. The shortest par four on the course opens proceedings; gently introducing you to the test to follow with the green fittingly nestled amongst the area’s wonderful Moonah trees. Equally as appropriate is the brutal 580 metre par five finishing hole, which into the wind can take three woods to reach and comes complete with a dozen or so pot bunkers dotted throughout its crumpled fairway.

Conceptually compelling, the Open Course at Moonah Links is one of the toughest tests on the planet from the back tees, and despite bringing little joy to the average hitter is probably the ultimate examination of today’s rapidly improving golf professional. 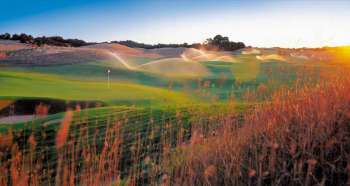