Pelican Waters (formerly Club Pelican) is situated at the southern tip of Queensland’s gorgeous Sunshine Coast and is surrounded by national parks and an unspoilt creek system. Though several kilometres inland from the famous coastline, the golf course retains a sense of the regions beauty with its diverse landscapes and crafted wetlands cleverly incorporated into the design. Holes initially weave around open areas of low-lying scrub and later through tall stands of native bush with the ever-present lake system a constant companion.

Like The Glades (on Queensland's Gold Coast), much of this course’s visual appeal is the result of the improvisation of designers Greg Norman and Bob Harrison. Here their flat canvas had an unusual twist with a clay based northern section and an attractive sandy heathland southern section that flowered prolifically for several months each year. Once the water bodies had been created the excavator’s actually shifted tonnes of this sandy material over the entire finished golf course shape. The native grasses then grew back virtually unassisted to form the natural roughs that now frame the groomed areas, working especially well leading in and out of hazards.

The classical bunkering is a feature of the design with the sand found on site helping to build bunkers with dark, vertical faces. These are essentially Sandbelt in style, but with a difference as the designers like to see wilderness growing out of the sides of their bunkers and by using the vegetation were able to create a number of wasteland hazards, some even extending all the way to the water’s edge. These impressive beaches of sand are particularly prominent on the first two par five’s and the par three 14th.

Despite being well endowed with a number of challenging long holes, Pelican Waters’ greatest strength is its short par fours. The 2nd is a superb example of strategic design with water running across the tee and up the right side of the hole tempting the bold player to take a risk. The longer the club the more water to carry to reach the fairway and if successful the easier the pitch into an angled green, with its series of left side bunkers impeding only those who chose to lay-up.

The other standout is the deceptive 12th, which Harrison rates as one of the best short fours the team has ever built. Here there is ample width off the tee yet parts of the sharply contoured green are hidden beyond a knoll if approached from the wrong side of the fairway. The back pins are especially difficult to get near unless the drive can hug the left-side fairway traps. Like the 2nd the brave drive here is rewarded with an ideal angle of approach and a genuine chance at birdie. Visually this hole is particularly pleasing considering the land was initially quite flat.

The finish to the round is extremely strong with the final four holes played back through dense bushland. The par five 16th bends and meanders through chutes of tall gums which seem to narrow as you near the small target. The 17th is another difficult dogleg while those who reach the 18th and relax are suitably punished by one of the toughest closing holes in Queensland. Take four here and you are likely to be signing an impressive scorecard.

Although the design team has had better land to work with, this largely unheralded course deserves to be duly recognised as one of the state’s top modern tracks. The contrasting native bush and heath landscapes are complimented by the rugged nature of design, which gives the course a rough edge foreign throughout Queensland. Far from your typical resort course, Pelican Waters is an original and one that would work just as well without the expectation of immaculate playing surfaces and the convenience of carts and red carpet resort service. Not that the perfect lush lies and lavish amenities are a problem, but the real pleasure at Pelican Waters is in combating the natural features of the site and mastering its constant unpredictability. 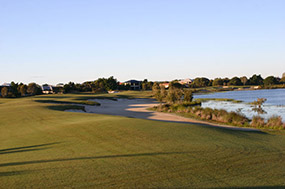 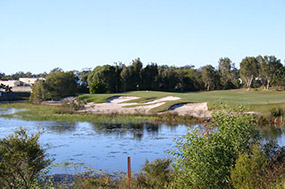 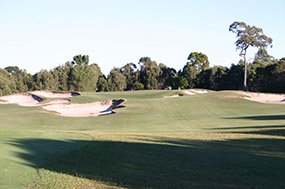 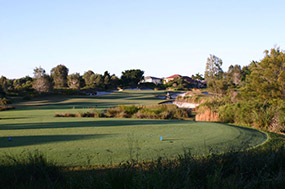