The Peninsula Kingswood Country Golf Club is a private members club. Visitors from Interstate or Overseas are welcome during certain periods of the week. Such visitors will need to be members of a recognised golf club, with a current membership identification card or a letter of introduction from the home club. Contact Planet Golf for assistance with tee times.

Located in the bayside city of Frankston, the Peninsula Kingswood Country Golf Club has two nice courses positioned geographically within the Melbourne Sandbelt yet only minutes from the thriving Mornington Peninsula. The club was originally founded (as Peninsula) in 1924 but only became a significant member of the Victorian Sandbelt in the 1960’s when it moved to an adjacent property and local golf identity Sloan Morpeth built its North and South courses.

While Morpeth incorporated twelve holes from the original layout into the South Course, the North Course, which was built on the undulating sandy high ground, was totally new. For more than thirty years the South Course, with its championship length and difficulty, was considered the club’s premier layout, the shorter and quirkier North Course built on the more dramatic land yet less regarded because of its unconventional design. At the turn of the 20th century Peninsula employed local golf designer Michael Clayton to oversee revisions to all 36 holes. With partners Geoff Ogilvy, Michael Cocking and Ashley Mead (OCCM) he was engaged again by the newly merged Peninsula Kingswood club in 2014, to redesign both courses a second time.

While the routing has not been significantly altered since the Morpeth design, the OCCM changes to Peninsula Kingswood North have been substantial. The most recent changes were unveiled to members late in 2018, and involved the radical reshaping of all 18 greens, tees and much of the bunkering. The upgrade also involved fresh infrastructure to improve course conditioning. The fairways have been converted to Wintergreen couch and the greens were resurfaced with Pure Distinction bentgrass, which provides a beautiful surface to putt on.

Although the redesign of the North Course was originally slated as minor, OCCM were seemingly given a freehand by the club and they used that licence to transform the look and feel of the entire course through sand and turf. The results are undeniably eye-catching. Bunkers are the most dominant feature of the new North Course, with the two bunkerless greens no longer free of sand and a number of fairways and greens virtually surrounded by a combination of formal traps and informal sandy wastes.

A large number of tee pads are also heavily bunkered, perhaps inspired by the popularity of vast sandscapes at New Zealand's Tara Iti or America’s Sand Valley and Mammoth Dunes. It will be interesting to see how the club's expanded grounds crew manage these maintenance heavy hazards over time, given the affects of wind blow and the sheer volume of sand they have to maintain.

Some of the traps work better than others to tempt golfers with strategy and if one were to criticise the new work, it might be that at times these holes do feel a little 'over-designed'. The bunkering tends to overwhelm from the tee in particular, and where it doesn't, such as on the beautiful 18th hole, the green is essentially surrounded by sand. Conversely, your approach into the wonderfully straightforward 4th green follows a tee shot that needs to squeeze between a hazard down the left and a series of bunkers closing in from the right. Across both nines, the threat of hitting your ball into a bunker is now ever-present.

While driving into sand will be much more common for members, without doubt the greatest risk remains the greenside bunkering, which is particularly fearsome on the North Course. The Sandbelt is known for its deep and difficult bunkers, and these are some of the nastiest in the city. Not only are the bunker lips high, the slopes off the traps into the greens are often severe. Most of the greens also feature a shallow wing, often wedged between bunkers and built to accommodate a tournament pin that only a Professional player could sensibly approach.

Regardless of any concern we have with the volume and location of the bunkering, there is no denying that the traps are nicely built and the fine detail work here, such as the low-set teeing grounds and green-to-tee transition areas, are first class. The land available for these holes along with superb conditioning, attractive native vegetation and an existing routing that takes great advantage of the rolling ground, are what elevate the North Course above the South, and above several high-profile members of the Melbourne Sandbelt.

The variety of shotmaking challenges is the North Course's greatest asset, its par threes run to all points of the compass and the medium length par fours bend both ways and slope up, down and across the tumbling hills. The front nine is built on the more dramatic land but the best stretch of golf starts with the 12th, an uphill par four with a hog's-back fairway lined by a sandy hazard and featuring an uncluttered skyline green. The next is a short four that once tempted members with its minimal bunkering but is now virtually encircled by sand and played as a layup-wedge hole. The pitch shot into the 13th is certainly appealing, though it’s unfortunate that fewer non-elite golfers will be tempted to drive toward the green than in the past.

The same could be said of the left-bending 8th hole, whose green was curiously moved and elevated in 2018 to no longer provide average amateurs a 'comfortable' bump and run option of approach. From one of the most enjoyable approach shots on the property, the 8th has sadly become the sort of hole that only a scratch player could love.

More positively, changes in both 2002 and 2018 have made par threes like the 2nd and 14th genuine Sandbelt standouts. Each features attractive greens wedged between sandy scrublands and large, bracken-covered dunes and ridges. Narrowing through a dune pass, the short par five 5th is another excellent hole, along with the expertly bunkered three-shot 15th and the fine sidehill par four finishing hole. We would have liked to see less sand on holes like the 3rd, 4th and in front of the green on the 17th, but otherwise enjoy each of these holes as well.

Aside from Royal Melbourne and parts of Victoria, Peninsula Kingswood’s North Course is as good a golf site as any in Melbourne, and Morpeth’s original design had always used the natural movement to great effect. The past two Clayton/OCCM redesigns have given the course an entirely new look and feel, and transformed a fun, quirky course into something ready-made to challenge the professionals. Although some members may find the layout too difficult, better players at Peninsula Kingswood are sure to love the new North Course. 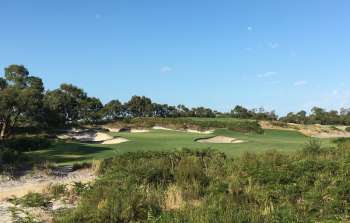 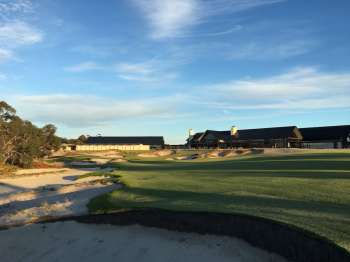 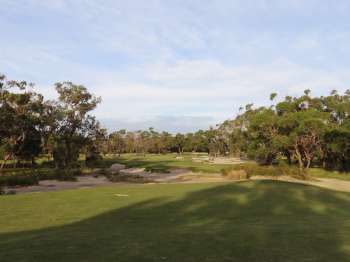 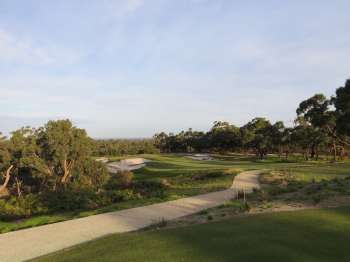