The Peninsula Kingswood Country Golf Club is a private members club. Visitors from Interstate or Overseas are welcome during certain periods of the week. Such visitors will need to be members of a recognised golf club, with a current membership identification card or a letter of introduction from the home club. Contact Planet Golf for assistance with tee times.

Located in the bayside city of Frankston, the Peninsula Kingswood Country Golf Club has two nice courses positioned geographically within the Melbourne Sandbelt yet only minutes from the thriving Mornington Peninsula. The club was originally founded (as Peninsula) in 1924 but only became a significant member of the Victorian Sandbelt in the 1960’s when it moved to an adjacent property and local golf identity Sloan Morpeth built its North and South courses.

While Morpeth incorporated twelve holes from the original layout into the South Course, the North Course, which was built on the undulating sandy high ground, was totally new. For more than thirty years the South Course, with its championship length and difficulty, was considered the club’s premier layout, the shorter and quirkier North Course built on the more dramatic land yet less regarded because of its unconventional design. At the turn of the 20th century Peninsula employed local golf designer Michael Clayton to oversee revisions to all 36 holes. With partners Geoff Ogilvy, Michael Cocking and Ashley Mead (OCCM) he was engaged again by the newly merged Peninsula Kingswood club in 2014, to redesign both courses a second time.

The first course to go under the knife was the South Course, which reopened gradually in 2016 and 2017. Although the routing remains largely unchanged all 18 greens, tees and bunkers were rebuilt. Aside from a dramatic improvement in turf quality, the other significant changes on the South Course include the lengthening of the opening hole to a much longer par four, the shifting of the par three 17th green and the establishment of wetlands around the 10th and 13th holes. The moving of the maintenance compound enabled a large swathe of vegetation alongside the 10th fairway to be converted into a wetland area that feeds a stream cutting across the 1st hole and running alongside the 3rd and 5th.

While most members and guests are sure to be delighted by the improved playing surfaces at Peninsula, the South Course does retain some fundamental flaws from the previous version. Moreso than on the North, you continually walk backwards between greens and tees on the South, and are uncomfortably cramped off the tee on a couple of holes. If we hold course routings like St Andrews (Old) and Royal Melbourne (West) up as Gold Standards, then the Peninsula South routing underwhelms. The opening sequence is also light on quality, most of the better holes coming through the middle of the back nine.

On the positive side, problem greens like the 1st, 3rd, 6th and 8th are significantly more playable now and the previously untouched par three 9th has been successfully re-imagined to follow a similar theme but with a more exciting green complex. The short 17th will also please those unimpressed by the previous two-tier version.

As successful as some of the greens reshaping has been, the dominant design feature of the new Peninsula Kingswood courses are the bunkers, which are loud and abundant on the South Course. A number of holes feature vast sand complexes that stretch either side of the greens and will be both maintenance heavy and difficult for the average amateur to successfully recover from. At times the bunkering feels overdone, though the traps are generally well positioned and quite striking. Fortunately the playing corridors are also generous, so avoiding trouble is certainly possible. The new holes provide an especially enjoyable test for elite golfers, who are less likely to be concerned by 60 metre bunker shots across sand than higher handicappers and also more tempted to take on high-risk shots into greens like the 5th, 7th and 8th. Highlight holes on the South Course include the long, par three 9th, the undulating par four 13th and the short, uphill 14th.

Members at the new Peninsula Kingswood Country Golf Club are fortunate to have access to 36 holes of well groomed golf, along with excellent amenities. Although the South Course does not occupy as interesting a piece of land as the North, it’s a solid golf course with attractive bunkering, slick greens, elegant short-grass transition areas and nice elevation changes from the 8th hole onwards. The low-set, freeform teeing grounds are also a highlight. Where it sits in the new Sandbelt pecking order depends on your personal perspective, and how much turf quality affects your enjoyment of a golf course. Peninsula Kingswood South is unlikely to be mistaken for a Royal Melbourne or a Kingston Heath, but is probably closer to that next rung now than it ever has been. 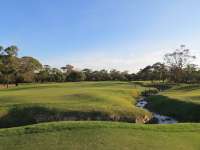 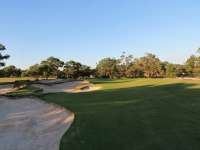