Sometimes a quarter of a century can pass in the blinking of an eye. At other times it seems like a world away. Thinking back to 1988, my strongest golfing memories were of Sandy Lyle’s bunker shot on the 72nd hole at Augusta National and Seve Ballesteros and Nick Price fighting out a classic Open Championship at Royal Lytham.

1988 was a landmark year for Australian golf as well. Not only did a star-studded field assemble at Royal Melbourne for the lucrative one-off Bicentennial Classic, but major champions (and would-be major champions) won the Australian Open (Mark Calcavecchia), Australian Masters (Ian Baker-Finch), Sanctuary Cove Classic (Curtis Strange) and both the Daikyo Palm Meadows Cup and ESP Open at Royal Canberra (Greg Norman). Greg Norman also won the short-lived Tournament Players Championship at Riverside Oaks in March that year, and eight months later was defeated on the fourth playoff hole at the very same venue by Wayne Grady, this time for the Australian PGA title.

Some will be surprised to read that the world’s best golfer played two events on the same course in the one year, or that the Australian professional schedule was once quite crowded. For local golf fans 1988 is one of those ‘world’s away’ cases.

Riverside Oaks is a curious place. Located in Cattai on the Hawkesbury River, an hour northwest of Sydney, the existing course does not, in fact, run alongside the river at all. Beyond the two big events in 1988 it also hosted another TPC and two further PGAs and became, for a period, a must-play destination in New South Wales. Although those days are long gone, the resort’s current owner has plans to revive the forgotten facility, starting with the building of a second course designed by Sydney architect Bob Harrison.

Unlike the old (Gangurru) course, Harrison’s new course gets down near the river and in several places provides golfers with lovely views across the water. The land it occupies was actually earmarked for golf from the very first masterplan back in the early 1980s, and Harrison himself had even planned a course on the site whilst working for Greg Norman Design in 1989/90. That design never materialised and it wasn’t until Riverside Oaks was purchased by China’s Nanshan Group in 2009 that plans for a second layout were revisited. For Harrison the timing couldn’t have been better.

After more than 20 years as Norman’s lead designer, Bob Harrison acknowledges that he found it more difficult than expected to establish himself as a standalone golf course architect. The Riverside Oaks appointment came after nearly two fruitless years spent submitting proposals and chasing leads. It also came with a catch. Despite the Nanshan Group being well resourced, for this project there would be only a very modest golf course budget. Gone were the $15-$20 million projects Harrison was used to and instead he was forced to finish everything, including USGA-spec greens, for around $5 million. Strangely enough, in some ways these budgetary constraints worked in his favour.

Aside from the water views, the most noticeable difference between the two courses at Riverside Oaks is the openness. The new ‘Bungool’ course, named after the heritage listed building beside the 1st hole, has fewer internal trees and a much more expansive feel, especially from the tee. It’s also blessed with enough interesting undulation to take a ‘low disturbance’ approach to design and still be able to create exciting golf holes. That’s exactly what Harrison has done here. Rather than spending vast sums of money moving dirt around, he mostly used existing landforms and wherever possible let the natural terrain dictate his design.

He also retained much of the site’s indigenous couch for his fairways. Where the land was reshaped his construction team encouraged the common couch to re-establish itself, either via rainfall and irrigation or by pushing a layer of soil and grass back over the finished shape. The only sod imported onto the site was for fringe areas around the bentgrass greens.

Beyond the obvious cost advantages of using a locally occurring couch grass, the fairways have also matured more quickly than otherwise would have been the case. This allowed the resort to open nine holes in April (1 to 7 and 17, 18), with the full 18 due to be finished and playable by the end of the year. Sydneysiders looking for something fresh and fun to play would be well advised to strongly consider a preview round here.

What golfers will experience when they first step onto the Bungool Course is an attractive, modern layout with a rustic edge. Harrison’s greens and bunkers are typically striking, but his shapes this time are slightly more rugged than previous work done for Greg Norman. They suit the landscape well. Even the earthy, orange sand used in the bunkers seems more appropriate for the setting than the typical blinding white sand we see elsewhere.

While both nines enjoy river frontage, the preview holes feel more open and also incorporate a couple of natural wetland areas. Harrison likes the fact the two nines are different, noting that ‘the back nine is wilder in nature, with individual holes somewhat more remote than on the front, but still with sections of the course where several holes are visible at the one time.’

Of the entire site, he adds that ‘it may be passé for golf course designers to say this, but in my view this really is a beautiful site. It's a very attractive, isolated landscape, with the spectacular riverfront and cliffs along one side, and the mature forest elsewhere around the perimeter.’

Aside from river views and the serenity of the setting, what Harrison liked best about this property was that it enabled him to produce a good golf course for a relatively low cost. Many natural features have been incorporated into his routing, from the riverbanks to the natural wetlands and from the small hills and ridges to a heritage-listed ruin that stands beyond the 7th green. Harrison believes that the future of new course development will be working with similarly skinny budgets, and continuing to ‘make the best use of the natural advantages on offer.’

With the exception of the 2nd hole, the fairways on the finished nine are mostly broad and forgiving but strategically arranged to encourage those seeking birdies to challenge carefully positioned drive hazards. This design tactic is especially evident on holes like the 3rd, a short par four that runs along the river and features a crowned green that becomes harder to hit and hold the further back the pin is pushed. Those hoping for birdies or easy pars will need to hug the left hand bunker with their tee shot, not easily done when there is a stack of room to the right.

The other riverside hole to open this month is the 7th, another short par four that offers even more spectacular views of the river. It’s also blessed with an elevated green set in the shadows of ‘Merry Mount’, an old brick ruin said to date from the 1820s and believed to be one of the earliest structures in the region. Harrison’s small, sloping green here is sure to become one of the talking points. Another will be the do-I / don’t-I par five 5th, a cracking hole played into a shallow clearing and toward one of the most appealing green complexes on the course. Those hoping to hit the target in two will not only need to avoid a well placed bunker in the middle of the fairway with their drive, they will then have to squeeze their second shot between a pond on the left and a series of traps cut into a bank on the right. The green itself sits at the end of the clearing and is steeply pitched from back to front.

The 5th is followed by another attractive hole, this time a mid-length par three played across a pond. As with most of Harrison’s green sites at Riverside Oaks, this one is partly protected by bunkers but mostly complicated by the short-grass swales and chipping areas that surround the actual putting surface. Harrison has designed his green surrounds to be mown at fairway height, saying that ‘if you miss in some locations you’ll be faced with a very delicate chip or pitch, but you’ll be playing from a nice lie and you’ll have options.’

Recovery options have always been central to Harrison’s designs, and are what helps make his courses so interesting to play. The Bungool Course is another that ordinary visitors and regular Riverside Oaks members are bound to enjoy, both for its scenic charms as well as its strategic challenges.

Those who have enjoyed Bob Harrison’s design work over the years will be pleased to learn that the lean times seem well and truly behind him. Shortly after being appointed to the Riverside Oaks project, it was announced that he was set to design a new course on a remote island in Scotland and that here in Australia he would be undertaking redesign work at both the Townsville Golf Club and Monash Country Club. He is also helping to redevelop the New Brighton golf course in Sydney, and is working on a couple of new projects in China with his Asian partner Harley Kruse.

For now, though, Harrison’s focus remains on putting the river into Riverside Oaks, and completing what may become the best new course to open in Sydney for 20 years. The second set of nine holes are currently under construction and should be open for play by November or December. 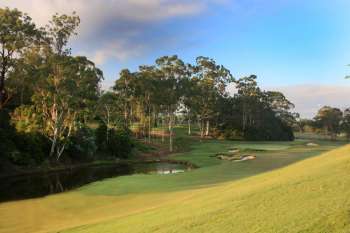