The Royal Adelaide Golf Club is a private members club. Visitors from Interstate or Overseas are welcome during certain periods of the week. Such visitors will need to be members of a recognised golf club, with a current membership identification card or a letter of introduction from the home club. Contact Planet Golf for assistance with tee times.

‘No seaside courses that I have seen possess such magnificent sand craters as those at Royal Adelaide.’ Dr Alister MacKenzie

Founded at Glenelg in 1892, the Royal Adelaide Golf Club moved to the sandy craters and dunes of Seaton along the city’s western railway in 1904, to a site that also housed a municipal train station providing members with easy access to their links. The first Seaton course was a modest design by committee members C.L. Gardiner and H.L. Rymill and opened for play in 1905. Rymill then upgraded the layout three years later, adding a thousand yards and incorporating the sandhills into the routing as well as several railway crossings. A subsequent beautification program introduced magnificent pine trees to the site and transformed the raw coastal sandscape into a grand scale ‘British-style’ golfing experience.

Like many of Australia’s best classics, the course received its most notable overhaul when Dr Alister MacKenzie made a flying visit to Adelaide in 1926 after designing Royal Melbourne West. Because MacKenzie was only in town for a few short days he worked fast, preparing a report that converted many of the penal fairway bunkers into undulating ground and reconfigured the eighteen holes to eliminate dangerous rail crossings. He also insisted on making full use of the site’s natural features by designing holes over and around the enormous dunes.

Tremendously impressed with the terrain and particularly excited by the abundance of sand, MacKenzie departed the club by boasting that ‘if the suggestions put forward for the reconstruction of the Royal Adelaide course are acted upon, it will be superior to most, if not all, English championship courses’. Despite a persuasive character and lofty reputation his proposal was not universally accepted and immediately following his departure heavy debate within the club led to a number of his recommendations being renounced. The club did build his inspired short par four 3rd hole, which has not changed, and the awesome sand crater drive at the dogleg 4th, which remains a MacKenzie moment despite the hole being stretched almost 100 meters beyond what he had intended. Eleven greens were also rebuilt, the rail crossings eliminated and over time the 6th, 9th, 13th and 14th all altered to resemble MacKenzie’s plan.

Aside from helping members realize the potential of their amazing site, MacKenzie’s gift to the club was to leave behind the extraordinary 3rd hole, which with a frontal pin may be the best short par four anywhere in the world. Although a visionary, he had no way of foreseeing the technological advances in our modern game yet managed to built a driveable blind par four along a heavy dune ridge that remains as mesmerizing when played with titanium as it would have been with hickory. The genius of his design is in the positioning of the green beneath the dune, and the scruffy knoll and small ridge that guard its narrow front. From the tee the critical decision is which club to take and whether to play safely to the top of the crest or head over the hill toward the green. Like all great tempters, the penalties are harsher the more aggressive you get and the approach more difficult the safer you play. An accurate tee shot with the driver equals a probable birdie and the straight lay-up a comfortable par, but stray with either shot and you are left fighting for a five.

The other obvious standout at Royal Adelaide is the 11th, the infamous ’Crater Hole’, its approach played from the peak of a rising fairway over a huge hollow to a green framed by an imposing pine-covered sandhill. Pushing the green site right back into the dune was actually MacKenzie’s idea, although his plan for a dogleg from near the present 10th tee was rejected. Holes like the 3rd and 11th became legends in Australia long ago and are duly preserved, while the continued tweaking of others like 4, 8, 13, 14 and 18 has seen them also elevated to a similar status.

Royal Adelaide is an offbeat, one of a kind course that has changed substantially over the years yet retained its fundamental character and charm. It may not be Australasia’s best track, but with a core of outstanding holes and an unmistakably adventurous streak, to many this is its most enjoyable. 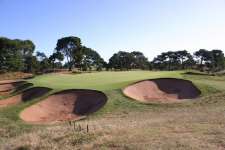 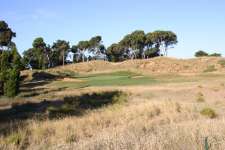 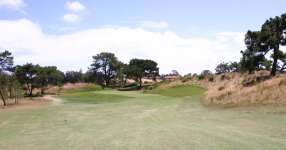