Of the golf courses the acclaimed Pines course is the highlight. Designed by golfing great Arnold Palmer, the course achieved instant recognition when the resort’s owners brought the Australian Skins game and high-profile Sanctuary Cove Classic to the new layout in the early 1990’s. Measuring almost 6,700 metres with an abundance of water the course stretched the professionals and received an unheard of AGU rating of 76. Although course ratings four shots above par have become more widespread, the Pines first took penal design to this new level and remains one of the toughest few courses in the country.

The course is carved through a Pine forest, which appears natural but was in fact planted by the developers as part of the Pine course concept. The routing weaves through the stands of trees and around six large man-made lakes, in play on fourteen of the holes to ensure there is no let up from the constant pressure.

Following a relatively benign opening, the brain is given a rest while the brawn takes over and tries to tackle a terrifying stretch of golf from the 8th through the 11th. Two unreachable par five’s, both over 530 metres, and two monster par four’s (over 430 metres) equal more than 1960 metres of heartbreak. Anyone taking less than 20 shots to play these four holes has done extremely well.

The 10th is notorious as perhaps the most intimidating hole in the entire country with water running down the right side of its narrow fairway and a pine forest down the left. There is simply no substitute for a long straight drive on this hole as anything less equals an instant bogey at best! The approach shot is also perilous with a surprisingly small green protected by water and generally attacked with a long iron or fairway wood.

There are many ways the Pines can ruin your scorecard. It can slowly destroy with its relentless pressure, or punish savagely on holes like the infamous 13th where a full 200 metre plus water carry is required to reach the island green. The long 18th hole, around the lake, is another severe test and an appropriate climax to the thrills and spills that precede it. To have any chance of getting to the small green in two the tee shot must skirt the water down the left side of the fairway, and while a par here is a tremendous achievement, those struggling through the first seventeen holes will be happy just to avoid a soggy ball on this difficult finale.

Don't expect to find anything new here design wise, but as part of a wonderful resort the challenge of the Pines make Sanctuary Cove worth the visit for many Gold Coast bound golfers. 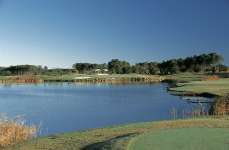