‘There are some great localities for golf around the world and the Cups region is one of them.’ Tom Doak

Situated in the heart of Mornington Peninsula’s Cups Country, St Andrews Beach was designed by Tom Doak and built around the same time as his more celebrated Barnbougle Dunes creation. Occupying some of the most suitable duneland in Victoria for golf, the holes were shaped with minimal earthworks and great natural features like deep fairway valleys, large basin target areas and natural sandy blowouts, all incorporated into the design.

Routed across a sizeable rolling pasture, the layout is dominated by a series of high hills and ridges that run through the site and divide the golf into smaller pockets. These ridges proved a popular place to locate greens and tees. Doak’s targets are often tucked into one section with the subsequent tee built high on the opposite side to provide golfers with outlooks across the attractive golfscape. Though green-to-tee transitions are reasonably short, it certainly isn’t the easiest of Doak’s courses to walk.

St Andrews Beach starts from atop one of the site’s more prominent hills, the opening hole a moderate length par five noted for its controversially hidden green site. The 2nd, a reachable par four that runs alongside an exposed sand dune, is probably the pick of the holes with its fairway sloping left toward the sandy wasteland and a tempting target situated in a shallow clearing. The approach into the 3rd is another standout. Here the tee shot around a hill is somewhat uninspiring, but those driving bravely are advantaged with a better angle across a bunkered dune into the undulating amphitheatre green. Best of the rest include the gorgeous short 6th hole, the cruelly domed 9th green and the strong par four 12th. The last half of the left-bending par five 17th is also excellent while the 18th is one of the finest finishers in Australia. From the tee a series of central bunkers split the fairway and create a safer lower platform and a tighter aggressive line, which leaves golfer a shorter shot into the large, layered green.

The most pleasing aspect of St Andrews Beach is its variety and the manner in which the designers created a challenging test that still throws up birdie opportunities to the average player. While the best holes are outstanding a few, such as the 10th, 15th and heavily dropping par three 16th, are less effective. As are some of the more isolated fairway bunker shapes that don’t work as well visually as the rugged traps that blend into either the dunes or the dune vegetation. The greens themselves are good and according to Doak among the best set he has created, primarily because the existing contours were so simple to shape. Complimenting his natural targets are broad collection areas that throw up some challenging short game situations.

Owing to the suitability of the virgin terrain, this was apparently the easiest course Doak and his team has constructed and, as the designer himself noted, it allowed him ‘the highest expression of his minimalist philosophy’. Although less dramatic than Barnbougle Dunes, Tara Iti and Cape Kidnappers, St Andrews Beach is a substantial achievement and an essential inclusion on any serious Melbourne-Mornington Peninsula golf itinerary. 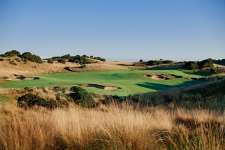