Best known in Australian golfing circles as a neighbour to the world-famous New South Wales Golf Club, St Michael’s was established back in 1938 and its original course designed by amateur architects Michael Moran and C.W. Cole. The course remains within the Botany Bay National park, and even touches the Pacific shoreline briefly but lacks the polish and interesting ground contour of its elder sibling.

Over the course of the last few decades St Michael’s has changed considerably, with a number of greens, bunkers and entire holes tweaked by various club representatives, including the golf professional. The result today is a disjointed layout that still provides an enjoyable test for the members but lacks genuine high-quality moments. There are a number of holes that could be outstanding, but are likely to leave the seasoned visitor scratching their head. The virgin land here does not compare to La Perouse, but there is still enough interest in the soft sandy dunes, and especially out near the ocean, to lift this layout significantly. The use of the native vegetation, the alignment of a series of greens and the general standard of bunkering across the property could be improved.

Despite its issues, the winds whip across this headland and the narrow, firm fairways make it a genuine test of ball striking precision. Good players, therefore, are likely to enjoy St Michael’s, while the more cerebral golfer is perhaps left to lament the fact that he/she is not playing next door. 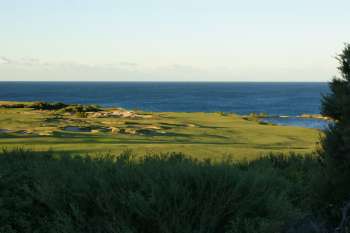