Marketed as Greg Norman’s first golf course in Sydney, Stonecutters Ridge was developed by Medallist and opened for play in September 2012, after years of planning and construction delays. The course is part of a larger 160-hectare residential development built on what was once a chicken farm on the western outskirts of the city.

Interestingly, the golf course was originally routed and designed by Bob Harrison whilst working as chief of Norman’s Australian design operations. Construction began in 2008, but a downturn in the Sydney property market slowed progress significantly. After Harrison’s departure in 2009 and the closure of Norman’s Australian office, it was left to the Shark’s Florida design team to finish the project.

The golf course itself is situated close to Eastern Creek, with the early holes occupying a flat flood plain and the rest set on rolling clay country with pleasant undulations and some reasonably attractive bushland. The dominant feature of the opening stretch is the constructed wetlands, which are well established and strategically incorporated into a number of interesting holes. The 3rd probably uses the feature best, having water pressed right up against its green and with a cleverly positioned Eucalyptus stump in the fairway to complicate the approach. The 4th and 5th are then both short par fours with the wetlands on the right-hand side, the 5th blemished slightly by a bunker that obscures the end of the hazard and unnecessarily pinches the fairway.

Once golfers complete another short par four at the 7th, they head under the main development road and into the more undulating bushland. Despite the superior golfing country, from this point Stonecutters is strangely underwhelming. The course isn’t poor by any means, but the design seems to lack coherency with holes either wide open but strategically empty or cluttered by large and unnecessarily elaborate bunker complexes. The 18th is a great example of the former, a medium length par five with an enormous landing area protected high on the right side by a pair of bunkers but with an open-fronted green that is accessible from anywhere on the fairway. Harrison was disappointed the hole he designed to play as a par four was stretched to a five.

Of more concern are extravagantly bunkered holes like the 6th, 7th, 9th and 12th, which don't quite work aesthetically. Even the most naturally attractive hole on the course, the 8th, is somewhat diminished by a bunker complex that eats too far into the right side of the fairway. Here the problem is less about the shape of bunkers and more about them being misplaced, with a curious valley created between the sand and planted vegetation on the inside of the dogleg. One suspects the design team felt the need to move play further away from future home sites, although there seems more than enough space here to push the trap out to where it feels like it belongs.

On the positive side, the short cross-valley 11th hole has obvious aesthetic appeal as does the peninsula par three 16th, its kidney-shaped target squeezed between two large traps and a wetland area. The 17th is another par three played, oddly, at right angles and from directly beneath the 16th tee.

Earlier, the opening hole is the first in a group of generously expansive par fives, but more satisfying strategically that the three that follow on the back nine. The simplicity of the par four 2nd is also impressive, with a small, solitary trap on the right side of the fairway protecting an angled green that is difficult to hold from the lower left-hand side. The greens themselves across the course are generally good, although they work much better when the surrounding mounds are less artificial and when the actual putting surfaces can be seen by the approaching player. Bob Harrison himself has expressed some disappointment with a number of the green sites, saying they didn’t quite turn out the way he wanted. The problem seems to have been that key putting shapes were subtly flattened when the sand was constructed over the clay bases.

These small points aside, the golf at Stonecutters is pretty good and the actual residential subdivision has been sensitively handled with housing intruding far less into the playing corridors than at other estates around Sydney. For the relocated Ashlar Golf Club, which moved here under a land-swap arrangement with the developer, the condition of the fairways and greens together with the length and difficulty of the holes is sure to appeal to a certain section of the membership, particularly in the early days. The disappointment, if you like, is that some of the difficult holes are a little overdone and unlikely to grow on those who seek enjoyment, rather than anguish, from their golf course. 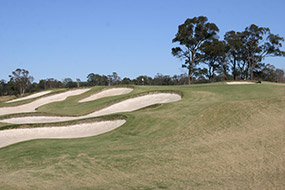 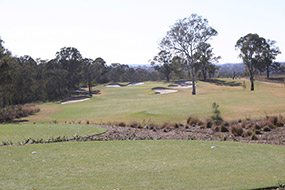 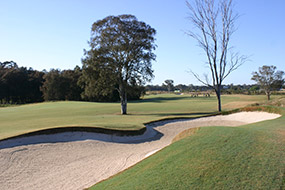 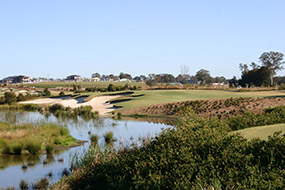