The Australian Golf Club is a private members club. Visitors from Interstate or Overseas are welcome during certain periods of the week. Such visitors will need to be members of a recognised golf club, with a current membership identification card or a letter of introduction from the home club. Contact Planet Golf for assistance with tee times.

Though the game of golf had been enjoyed in Australia from as early as 1834 it wasn’t until 1882 that golf clubs were formally embraced, the first appropriately named The Australian. Steeped in prestige the club was founded at Centennial Park, making its permanent home the current Kensington site in early 1904.

The move not only signalled the birth of a great golf club, but also the nation’s Open Championship which the Australian Golf Union decided would be hosted at the new Kensington links. The choice of venue for this inaugural event was strange considering The Australian course hadn’t been built and Royal Melbourne, Royal Sydney and Royal Adelaide were the constituent clubs who formed the first AGU council. Unfortunately little is known of the politics behind the decision.

During the 1960’s The Australian lost part of its site when the New South Wales government reclaimed land to expand Sydney’s freeways. With layout changes enforced upon the club a move towards an American style of design was resisted and Victorian Sloan Morpeth instead employed as course consultant. The resistance would not last long however as a few years later the links fell victim to the most radical course upgrade in Australian history.

Kerry Packer’s Consolidated Press had taken over the running of the Australian Open in 1975 conceiving the idea to fully commercialise and televise the event with Packer’s home club, The Australian as the venue. Stunning the golf world by producing the first tee to green coverage of all 18 holes he then dropped a bombshell by informing the club that he wanted Jack Nicklaus to totally redesign the golf course in time for the 1977 Open.

Tougher and custom built to host the event, the course would be set-up for television and feature smaller greens and increased mounding and hazards with the full costs of the redesign at Mr. Packer’s expense. Despite strong objection his proposal was narrowly passed and the classic links transformed into an American parkland course. Nicklaus made further changes after the first Open then returned the following year to capture his sixth and final title on the course he’d built. The layout has seen very little change since.

While alterations to the Morpeth routing were very minor, the playing characteristics were totally abolished. The blind shots were removed, natural sand hills converted to rough covered mounds and the generous fairways narrowed and defined by a dense second cut. To the horror of traditionalists their beloved links was transposed with tall trees, thick rough, small subtle greens and the bane of all traditional golf courses, water hazards.

The firm, fast greens are guarded by sculptured undulations, deep unforgiving sand traps and small ponds with most slightly offset against the fairways to place extreme pressure on the long game. Unusually the longer holes are actually protected by the smallest and most severe greens, and particularly punishing on the overzealous.

Each nine concludes with a series of adjacent long holes running back and forth to maximise the effect of seasonal winds. The 7th through 9th is a brutal stretch with three long narrow two shotters played to small greens guarded by ponds and fearsome bunkers. The final holes on the back nine are only marginally tamer with the 16th and 17th long par fours typically severe on the missed shot and the 18th a classic mid length par five complete with a lake to catch those who press too hard for a closing birdie.

Rating The Australian is a difficult assignment because despite appearing a charmless grind, many are seduced by its exclusivity and history. The holes are also usually well maintained, which helps explain why the course has enjoyed such prominence on Australia's Top 100 list. 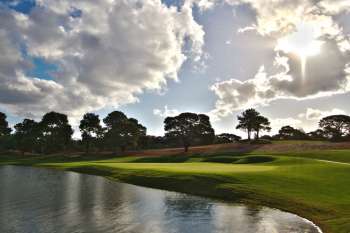 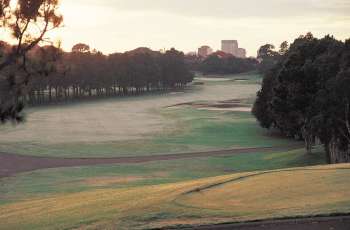 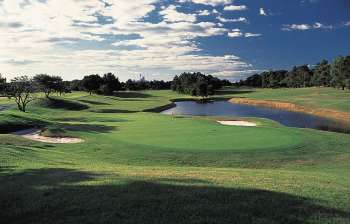