Located amid the glorious sandhills of Victoria’s Mornington Peninsula, The Dunes Golf Links was created in 1997 and designed by local architect Tony Cashmore. The 27-hole facility is owned by Duncan Andrews, the developer of the Cape Wickham Links. Andrews had purchased the property at auction, after a previous golf development on the site had failed. He and Cashmore then spent several years carefully reshaping a primitive and partially built layout into one of Australia’s most popular, and successful, public access golf courses.

Known previously as Limestone Valley, the existing holes had played mostly through deep valleys with little shaping, few bunkers and modest greens. Aside from views and the challenge of Man versus Mother Nature, they did little to attract the serious golfer. Cashmore refined the targets and hazards, and transformed the land into a classy dune course by modifying existing shapes and devising new ones to blend holes into a seamless golfscape. With generous fairways set between the dunes or routed across the ridges and a number of greens built in attractive hollows or atop gentle plateaus, the site appears naturally suited for golf yet major earthworks were required on several holes to ensure visual continuity.

The strength of The Dunes is the sum of its parts with 18 fun holes and few truly weak areas, the opening tee shot, dogleg angle on the 9th and a handful of awkward rough spots aside. Even the previously unlovable par three 6th is now more fun, thanks to a new elevated tee pad and an accessible green that requires a precise, chasing approach. The other significant change here since 1997 is the replacing of the 15th and 16th with two new holes through an adjacent property. The old 15th featured an iconic tee shot and very cool fallaway green site, but the new hole does have more natural appeal through a couple of sizeable hills. The par five 16th is also fairly dramatic, and interestingly plays to the old 16th green, which was designed to be approached from a different angle.

Aside from some handsome back nine par threes, it is actually hard to nominate a standout hole at The Dunes because they are all enjoyable and hold some visual interest. As Cashmore explains, this was due to the fact the land either, “yielded natural golf vistas, or was deliberately fashioned to excite the golfers eye from the moment he arrives at the tee.” Beyond beautiful shots into the par three 13th and 17th holes, the other obvious highlights would be the short and nasty par four 4th, the three-shot 5th with its obscured drive and wonderful cluster bunkering, the left-bending and rising 8th and attractive shots into the 10th green and through the valley from the tee on the finishing fairway.

Fully public and modestly priced, The Dunes was a significant golf course in Australia as its quality helped popularize the now burgeoning Peninsula region, and its critical acclaim encouraged other developers to seek naturally suitable golf land in this well-endowed country. Were it not such a critical and commercial success, we may not have seen the other modern gems that followed in states like Tasmania and Victoria.

The Dunes is also home to the 9-hole Cups Course, which represents perhaps the best value golf experience anywhere in Victoria. Not only are some of the landforms across this loop exciting for golf, the focus on fun, playable holes at the expense of length or difficulty is a welcome relief from many of its neighbours. The Cups Course is also the only course we know in Victoria that allows, and even encourages, dogs. The Cups Course green fee and annual membership fee is ridiculously low for the quality of the golf. 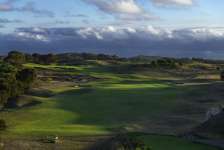 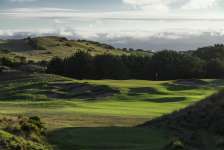