‘It’s interesting that most people think that we were lucky enough to inherit all of these wetlands before building our golf course. In a way that’s a nice compliment, but the reality is very different.’ - Bob Harrison

When the Glades opened toward the end of 2000, it was to an unprecedented level of interest and critical acclaim for a Queensland resort. It appeared an increasingly discerning Gold Coast market wanted a break from the standardised US style resort course and instead sought a championship test within an attractive natural sanctuary.

In fact the Glades land was originally a flat, featureless dairy farm entirely covered in kikuyu when an ambitious Korean with a dream armed Greg Norman Golf Design with a generous budget and a brief to build the best golf course possible. This proved especially difficult as the site was located within flood plains and local authorities insisted that its capacity to store floodwater be retained. To offset the residential areas, which had to be built up, the golf course was constructed between one and two metres below its previous ground level with a delicate balance of cut and fill required to meet the project’s aesthetic and technical requirements. As a result and surprising to most, every feature of the golf course is artificial, the outcome of what designers chose to do with their empty canvas.

The central feature of the design are the wetlands, all nine hectares of them, which spread throughout the site to enhance the course and contrast the lush playing surfaces. They also serve an environmental purpose with the region now alive and thriving with an abundance of waterfowl and birdlife. To help these hand drawn hazards appear as totally natural bodies of water the designers used images from wetland books as references, planting reeds and scattering dead trees throughout the murkied waters for effect. Some logs were laid in the water, and others planted vertically to make them look like they had died in place. Despite each tree costing around $5,000 designer Bob Harrison recalls that the client, initially shocked by the cost, ‘eventually embraced the idea and we ended up with dead trees everywhere’.

As one would expect the standout holes are those which incorporate these wetlands. Many are shaped around the water and angled to provide an optimum line of approach for those running the gauntlet from the tee. An exception is the 2nd hole which cuts around a lake with its green actually titled toward the outside of the fairway. The long closing hole however is the classic example of a hazard that should be attacked, as the narrow green becomes either unreachable or virtually unholdable to those who drive too far away from the water.

Another highlight is the 16th green, which is delicately angled to reward the aggressive line alongside or across the water from the tee with an approach free from the encumbrance of gaping sand traps and sharp slopes. In this country water carry par threes don’t come any prettier than the 17th hole at the Glades. The short iron from an island tee to the peninsula green is played across the most secluded section of wetlands with a shallow target dangling enticingly on the very edge of dry land.

The greens at Glades are well conceived and generally raised for protection from the more severe floods. Surfaces are turfed with the finest A4 Bentgrass, which explains why pampered southerners feel particularly at home here. Cleverly contoured they are hard, fast and guarded by strategic bunkering and clever swales usually on opposing sides of the targets. Norman himself likes this balance and believes the greenside undulation allows a good player with feeling in his hands to get up and down from almost anywhere. He says that ‘the fact some greens are elevated actually helps the concept. The average player is not penalised by barbed wire rough on the immediate green surrounds and can even putt out of some of the hollows.’

Sadly the Korean developer fell upon hard times in the 1990’s and the course sat dormant for three years before a consortium purchased the site, added the finishing touches and completed the concept. Despite its humble beginnings the Glades is an Australian original and a stark reminder of what a great imagination and fanatical attention to design detail can overcome. 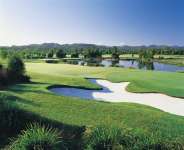