The driving force behind the ambitious Links Lady Bay project was a local dairy farmer who sought to create a quality golf experience in an effort to sell real estate on the developing Fleurieu Peninsula, an hour south of Adelaide.

Designed as a traditional links, the course was built by Melbourne superintendent Graeme Grant, who started with his bulldozer at the first tee and did not finish until all 18 holes had been shaped. The eager designer worked sunrise to sunset on what he clearly considered a ‘once in a lifetime’ piece of land within fertile coastal sand dunes that overlooked the glorious Peninsula coastline.

Grant and co-designers John Spencer and Jack Newton had to deal with a limited budget and ferocious winds that wreaked havoc on the exposed site during construction. At one stage the developer had to employ nearby schoolchildren to hand plant veldt grass on the dunes besides the 17th green to prevent the sand from blowing away and exposing the freshly laid green. Golfers can expect these same fierce winds to accompany them as they battle their way around the course.

The terrain was well suited to the links concept with the fairways built out of tumbling sand hills and lined by tall strands of native grasses. Greens are large and nicely contoured with superb Bentgrass surfaces that generally roll as true as the celebrated private clubs in Adelaide. The bunkering was left deliberately wild, which is consistent with the rugged site and helps give the course a somewhat natural appearance.

One of the more attractive holes on the course, the 1st bends nicely through dunes toward a green nestled in a hollow and surrounded by large mounds. The short par four 4th hole is another on the front nine worthy of mention with its ‘L’ shaped green causing all sorts of headaches for those who misjudge the approach shot.

The tricky short four 10th and long par three 17th are the highlights of a back nine is split by a large ridge running through the site. The long 12th is another links-like hole played through a chute of sand, usually into the stiff southeasterly wind, toward a huge green almost 100 feet long. From the 13th the course heads inland over the hill with the next four holes played through a valley surrounded by farmland. This less interesting land was used for golf to maximise the residential allotments and ensure each home site overlooked course and coastline. The best outlook though is saved for those on the 17th tee as the hole cuts back across the ridge towards the main site with views of the distant ocean.

Links Lady Bay may not quite reach the dizzy heights of 'sand dune' contemporaries elsewhere in Australia, but it is a good golf course and clearly South Australia’s best modern layout. 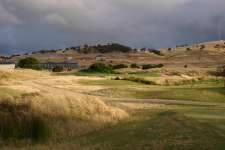 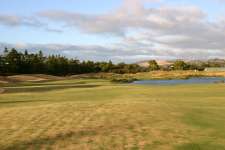 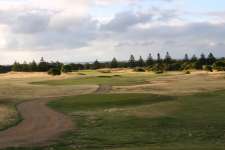 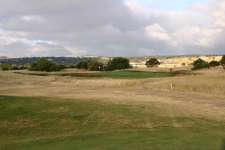