Update: The Ocean Course at The National Golf Club has been renamed the Gunnamatta Course and completely redesigned by Tom Doak and his Renaissance Golf design company. The course reopened in November 2019, with much more exaggerated putting slopes and large, windblown sand bunkers.

We will update our Planet Golf review shortly.

‘The Ocean Course is as close to a natural old links as anything available outside of Britain.’ Michael Wolveridge.

Following the success of its Trent Jones course, the National Golf Club in Victoria sought to expand its golfing empire by building two new courses along the stunning coastal sand hills of Cape Schanck. Despite a remote location the project was a major marketing success thanks to the involvement of Australia’s most successful professional golfers, Peter Thomson (Ocean) and Greg Norman (Moonah), who each designed a course on the glorious site.

For the team of Thomson and design partner Michael Wolveridge the site for their Ocean Course provided a truly splendid assortment of endless sand hills and complimented the pair’s philosophies perfectly. Their traditional style of design had seemingly found its ideal canvas.

Wolveridge describes the essential feature of the course as ‘its proximity to the sea and extensive views. Most of the time the course meanders through spectacular dune valleys, occasionally rising unexpectedly to capture magnificent views of the Bass Strait’.

The key from the design perspective was to understand the land and find the best fit of holes. Modern advancements in earth moving equipment, that had allowed Trent Jones to ‘create’ holes on the old course by moving up to a million tons of dirt during its construction, were famously ignored. Instead the intrepid designers, intent on causing little disruption to the fragile natural landscape, sought to ‘find’ holes that had fallen naturally across the existing terrain.

In time honoured traditions they painstakingly walked the site on foot with tees, turn-points and green sites staked as they presented themselves. This was done from the 1st tee through to the 18th green, conceptually the layout created whilst animals grazed in the pasture. When the time came to finally define the holes, only minor earthworks were needed with Wolveridge and his shaper starting at the first hole and arriving six months later at the 18th. As he explains this process ensured that the remnant vegetation was not disturbed while fairways ‘retained the subtle undulations of the existing landform, thereby revealing their true links character.’

The result is unfortunately a missed opportunity, the course does enjoy a beautifully wild links feeling with holes seamlessly imposed upon the glorious coastal landscape, but there aren't enough great holes here to justify the method of routing and design. What Bob Harrison did on the property next door and how Bill Coore worked at Sand Hills in Nebraska, was to find dozens of possible holes and routing combination's and then work on selecting the best and most appropriate final 18. Wolveridge wanted to build the Ocean Course the old-fashioned way and in the process he missed some cracking land and the prospects of exhilarating golf.

Some of the more memorable features of the Ocean Course are the expansive views from the 1st tee, over Bass Strait and most of the Peninsula’s links land, the large sand quarry and beautiful green site at the 4th and the punchbowl 15th green, a throwback to the very finest British links. An interesting aside is the choice of fairway grass, a special Bermuda hybrid, chosen to limit the effect of modern equipment advancements by reducing the run on the sloping fairways. Its thicker cover affords less roll than traditional links grasses yet still retains a smooth and consistent surface. Fairways here tend to bend through the waving native grasses, holes dotted with circular pot bunkers and a number of targets raised to further complicate approach play. The greens are subsequently more exposed to the elements than those next door at Moonah with holing putts on the slick surfaces awfully difficult in the frequently high winds. Some of the extreme putting surfaces have been softened since opening, but there are still plenty of problem spots remaining.

Along with the adjacent Moonah layout and Barnbougle Dunes, it’s hard to make the case for any Australian course in the past fifty years being built on a more spectacular piece of land. The Ocean course may not to everyone’s liking but it's decent golf and always great to be playing among such a spectacular golf setting. 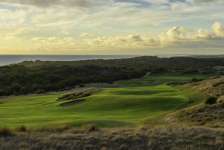 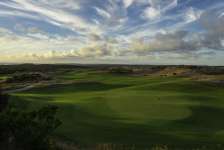