Situated in the famous wine-growing region of the Swan Valley and framed by the foothills of the Darling Ranges lies the highly rated and golf driven Vines Resort. The resort’s original developer allowed course designers Ross Watson and Graham Marsh to select the best available land from the sites 1000 acres with the resort, residential and country club facilities then built around the golf courses.

The Vines first opened as a 27 hole facility, with two of the nines forming a composite course, which has been regularly used as a professional tournament venue. When the fourth nine was added, in 1997, the current courses, Ellenbrook and Lakes were created.

The latest nine forms part of the Ellenbrook course which touches the Ellenbrook Creek and has some major elevation changes, particularly on the older and more interesting back nine. As the name suggests, the Lakes course incorporates several man-made water hazards, which feature most prominently on the famous finishing holes. Though many visit the Vines hoping to play the composite course, the Lakes has some good holes and is well worth playing.

Set up more like a traditional championship layout than a modern resort course, the course is known for its well kept, undulating couch fairways and firm Bentgrass greens protected by strategic bunkering. Weaving initially through the rolling Australian bush and a wonderful array of native flowering trees and ancient black boys, the round culminates in the dramatic closing holes built around the resorts main lakes.

Designer Ross Watson believes the most dominant feature of The Vines is the manner in which the course sits naturally into the site. ‘It was framed at the outset by the native flora with much care taken not to disturb more ground than necessary’ he says. The charming setting, traditional bunkering, firm surfaces and natural sandy base help give the course a classic Australian feel and make it one of the golfing highlights of Western Australia.

The round starts off gently enough with a couple of generous mid length par fours followed by a reachable par five, before the course bears its teeth at the tough 4th and 5th holes. Both have treacherous greens, the swales and hollows on the long par three 4th and the horseshoe shaped 5th green being among the most extreme on either course here. The back nine is clearly superior with highlights including the Sandbelt style bunkering of the par four 11th hole, the double-plateau green on the 14th and the closing lake holes.

In true resort fashion the par five finishing hole offers a grand stand all or nothing water carry to those searching for a last-gasp eagle, and has seen plenty of drama both in professional tournaments and social fourballs. Watson describes the hole as being ‘right up there in the standout stakes. One must attack from the tee to set up a good chance to reach the par five green comfortably in two, which is not good enough in itself, as the green is huge with some very interesting contours.’ A watery grave awaits any loose shot but as the designer points out ‘it's not a time to be ‘fainthearted’ as the ‘field’ will be treating this more as a long par four, the pressure is on.’

Designed as a championship venue, the resort also sets up well for the average player with broad scale playability a key consideration. As Watson explains ‘The Vines fairways are for the most part reasonably generous and when using medium tee and pin locations the course sets up beautifully for a "fun day" played on some of the best turf in the country.’ He adds that the ‘holes were carefully designed to afford fun and challenge for the widest skill range and yet test the world's best tournament players.' 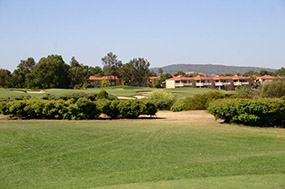 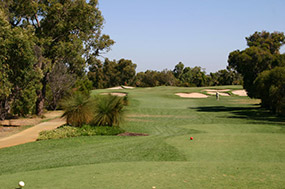 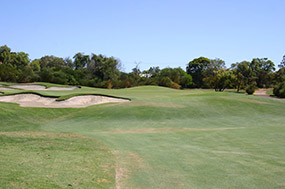