The Victoria Golf Club is a private members club. Visitors from Interstate or Overseas are welcome during certain periods of the week. Such visitors will need to be members of a recognised golf club, with a current membership identification card or a letter of introduction from the home club. Contact Planet Golf for assistance with tee times.

Melbourne businessman William Meader is considered the forefather of Victorian golf, having helped establish the state’s Golf Association in 1902 and founding the Victoria Golf Club the following year. Meader was later the driving force behind the club’s move into the southern Sandbelt and in 1923, with club Captain Oscar Damman, designed the current layout. Course construction was hampered, however, by bad weather and problems with site access but the delay proved a blessing as it allowed traveling architect Dr Alister MacKenzie to advise on the bunkering of the unfinished course in 1926.

Clearly impressed with the property, MacKenzie told the club that ‘little more is required to make this a magnificent golf course’ and then proceeded to add finishing touches to the existing routing by mapping bunkers and suggesting a few green changes. Although some downplay MacKenzie’s influence at Victoria, it is impossible to deny that, like Kingston Heath, his input was significant and his superb bunkers define the character of the course.

Perfectly located little more than a wedge from Royal Melbourne, the layout these three men created is outstanding with a collection of fine holes falling beautifully across a naturally rolling landscape that is somewhat reminiscent of its famous neighbor, albeit on a slightly smaller scale. The central and southern sections of the site are the highlight, particularly holes 9 through 13, which take the golfer on an absorbing journey through the most interesting undulation on the course. The long 9th is a classic Sandbelt par five running across tumbling ridges while the wonderful short 10th, described by MacKenzie in 1926 as ‘a fine drive and pitch adventure’, features a dipping, sweeping fairway and sublime elevated green site. Falling away toward the south-western corner of the property, the charming 12th is followed by a cracking par four that heads blind over a rise then into an elevated green from a down-sloping fairway.

Many believe Victoria’s weakness is the configuration of holes as each nine closes with back-to-back par fives. Despite being an unusual arrangement, both the 9th and 17th are excellent holes and the short 18th provides a stirring finish with many matches decided on its enormous front-to-back sloping green. The only real black spot is the opening hole, a driveable par four with a horrible green that was raised during the 1980’s. Until recently the bunkering was also a problem as years of slow deterioration had changed some of the original shapes and left the club’s famous hazards looking dated and tired. Using a black and white aerial shot of the course taken shortly after its 1927 opening, MacKenzie’s original concepts were faithfully restored by local architect Michael Clayton, who also lengthened holes like 5, 9, 17 and 18 and tightened some of the landing areas. These changes were relatively minor but have enhanced the layout and again made it a relevant test for the good players.

Long regarded as one of Australia’s elite courses, Victoria exists today as a tribute to the hardworking pioneers who laid the club’s foundations and the divine contribution of Dr MacKenzie who helped shape a very good course into a truly great one. 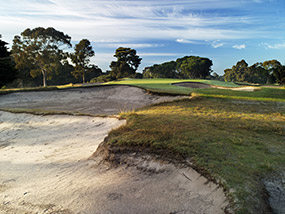