‘There is nothing commonplace about it’ – C.B. Macdonald on the Mid Ocean Club.

The golf course at Mid Ocean is part of a luxury club built within an idyllic estate on the sun-soaked island of Bermuda in the mid-Atlantic Ocean. The original development was started back in 1919 when an international shipping company hired American golfing pioneer Charles Blair Macdonald to find land on the island to develop a resort golf course, primarily for their holidaying passengers. Macdonald scoured the small land mass for his site, and selected a cliff-top property at Tucker’s Point that allowed him to spread the holes across a series of steep coral hills, interspersed with deep inland valleys and full of breathtaking ocean vistas.

Despite its coastal setting and unmistakably British feel, Mid Ocean is not a real links, although the designer did incorporate features and hazards found on the classic seaside courses. Like he had done previously at The National Golf Links in New York, here Macdonald built copies of his favorite holes from Britain and Europe, most successfully at the 5th and the terrific 17th, which is a Redan hole but played slightly downhill to a fully visible green site. Slightly less effective are other replicas such as the Short 7th and Biarittz 13th, with its square green and big frontal tier a copy of the fabled French ocean-carry par three that was lost to the sea during the 1940’s. As evident in some of his green shaping, he also seemed to have a healthy respect for the Old Course at St Andrews, the contouring at 1, 3, 8, 12, 14, 16, 17 and 18 among the highlights of the round, hit the wrong side of any of these huge greens and you end deep in three-putt territory.

Its obvious attractions aside, the Mid Ocean course remains best remembered for its legendary Cape hole, the 5th, which is an architectural masterpiece that has inspired thousands of replications all over the world, especially in North America where a Cape hole seems an almost obligatory part of every modern golf course. Plunging down and diagonally across a Mangrove Lake, the genius of the hole, like the 16th at Commonwealth in Australia, is not the ever-present threat of water down one side but instead the shape of a green which forces those looking for birdie to drive closer to the lake. Here a steep right-to-left tilt to the putting surface is further complicated by a prominent ridge running through the right half to further shrink the landing area for any approach coming in from the safer side. To some degree technology has slightly spoilt the driving challenge for the good players here as the back tees are further left and play more across the water than the original tees, which head diagonally along the lake. Whether this historic par four is superior to the 2nd at North Berwick in Scotland, upon which it was surely based, or the hundreds of subsequent versions of the Cape is debateable, but there remains no doubt that this much-copied hole is an outstanding success and rightly revered.

There are other moments to savour as well including a fine opening hole, difficult approaches into the 8th and 9th, the cross-hill 12th, a terrific closing stretch from the 15th and a diverse set of driving challenges, with no two tees presenting the golfer with the same visual examination. Macdonald also cleverly kept tees and greens close together to ensure it was a manageable walking course despite some steep gradients. There were minor modifications made to the layout in the 1950’s by Robert Trent Jones, including back tees on the 5th, but so sound was the original planning that, Trent Jones himself acknowledges, these changes were insignificant.

Mid Ocean does have a couple of problem spots including scattered housing and a public access road dissecting the property, which together with the widely varying landscapes give the layout a slightly incoherent feel. These issues aside, Mid Ocean was the earliest example of quality golf design in the islands around America and the club remains the region’s shining light. Those who dismiss the course as a one-hole wonder are likely to not only miss a great hole but a truly exceptional golf experience. 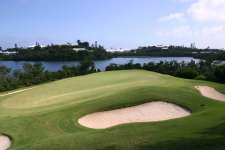 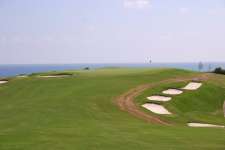 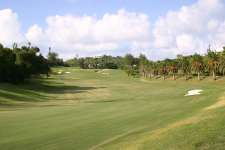 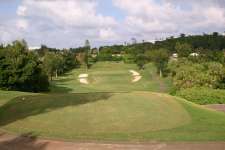