The National Golf Club of Canada

One of the stiffest tests in North America, the National Golf Club of Canada is an exclusive club that was established in 1976 on the site of a former golf course. Designed as a golfer’s golf club, the founding membership had also purchased additional acreage around the course to allow designers George and Tom Fazio to stretch the layout to championship length and meet their ambition of housing Canada’s toughest course.

The existing layout had enough natural ground movement for good golf as well as several large ravines, the Fazio’s then incorporated the odd pond and built severe driving zones, small greens and added several forced carries to ensure that the new course was utterly unforgiving. While most will be overwhelmed by such a challenge many good players, who equate difficulty with quality, actually rate this as Canada’s top track.

Less taxing than the back nine, the more enjoyable outward side opens with a lovely rolling par four that moves right and rises gently into a false front green. The downhill approach into the 3rd is also quite nice with a back left pond pressed hard against a left sloping green site. The 4th is an incredibly narrow par five smacked between trees and a creek that must be crossed before reaching the small and heavily bunkered target, while the 5th, with its tiny green, is the first of four difficult par threes. The front side standout, however, is the long and dramatic par four 7th, which snakes over and then left around a killer ravine. There is plenty of room to the right of the hole but temptation invariably draws you closer to danger on both strokes.

On the back nine the real eye opener is the absurdly narrow 13th hole, its slither of fairway snaking between a pond and a large hill that appears steep enough to spear tee balls all the way across the fairway and into the water. An uphill approach over sand and a further pond into a shallow shelf of green is almost as tough. The tee shot on 14 is also severe, as is the tight drive on 17 between trees and a hazard but the piece de résistance is the almost Cape style finishing hole which is long and drops forty feet from tee to narrow lakeside fairway and then rises forty feet again into what feels like one of the smallest targets on earth.

Although it may seem wrong to focus solely on difficulty, The National was built to be the toughest course in Canada and there are few more relentlessly demanding parkland layouts anywhere. Even fun holes to play like the 3rd, 4th, 7th, 13th and 17th are extremely brutal with the smallest error on any generally resulting in the need to reload. It is unfortunate that the quality of such holes is often overshadowed by the inherent difficulty of the overall experience, though one fancies that is just how the club likes it. 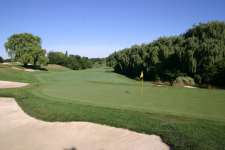 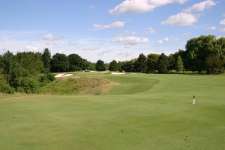 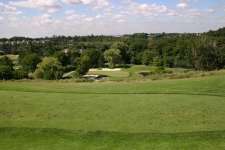 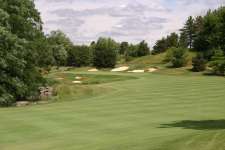