The Dragon Lake Princess Hotel is an unusual establishment north of Guangzhou, set near a Dragon-shaped lake and the large Jiuwantan Reservoir. Far from your conventional five-star resort experience, here the developer built a replica old-world European style town with the accommodation set in rooms above the various town businesses. The cobblestone shopping streets attract tourists to the region, who are also able to play one of the more memorable golf courses in all of China, the King Course at Dragon Lake.

Designed by IMG and first open for play in 2011, the 27-hole King Course is set partly on the edge of the reservoir, and partly within the wooded hills overlooking the vast body of water. The course takes a fantastic photograph but is carved from some of the most severe and inhospitable terrain anywhere for golf in Asia. To even think a course could be built in such a locale seems plain crazy. Holes are typically laid across the dramatically collapsing ridges with narrow fairways set between hills and enormous ravines on the opposing sides. With only a few exceptions, most fairways are too narrow and most holes either too steeply uphill or too severely downhill for sensible play.

The 27th, and final hole, pretty much sums up the entire property. The hole is a 164-yard par three that barely requires more than a flick of your lob wedge off an incredibly steep hill down to a green more than 100 feet below. The green is bunkered to resemble a giant paw print.

Like elsewhere on the course, it’s hard to gauge distances here because of the extreme elevation changes and the affect wind has on balls dropping so severely. The 4th hole, for instance, runs out of fairway around 400 yards from the tee, which wouldn’t ordinarily cause concern except that the drop is so steep some may actually find themselves in trouble.

Sadly there are too many other extreme holes to single out, but those most notable are the ones that either duck dive straight down hillsides or climb up over nasty ravines. Some do both. Out of 27 holes the only ones we found with sensible play areas and good form were the likes of the sidehill par three 2nd, the shorter cross-canyon 11th and par three 15th with its attractive reservoir outlook. Of the longer holes, the approach into the 24th green has a beautiful backdrop while the long par four 20th has nice scale and some sensible space to play shots. The cart path cutting in front of its green is unfortunate.

As for the rest of the course, most is shake-your-head puzzling – from the location of the 19th tee a full kilometer from the 18th green, to the sheer number of crazy greens and fairways set atop or across steep hills and ridges.

Lots of golf courses in China are unwalkable but this one is undrivable, literally. The paths are deemed too dangerous for resort guests so they insist that caddies do the driving, and understandably when you see how treacherously some of these holes dive and climb. For purists this is about as removed from the traditions of our game as anything else in golf. The constant views of the reservoir are great, but the layout is nothing more than a series of shots connected by long paths. The routing has no flow at all, and few of the features belong on a proper golf course. Those who like this sort of golf can pretty much disregard anything else written on this website.

Dragon Lake might be a photographers dream, but it doesn’t take more than a couple of holes or even a couple of shots to realize this was no place for golf. 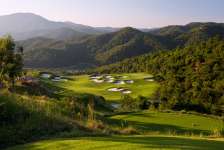 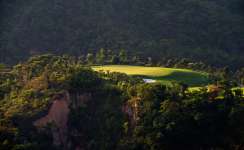