A short drive north of the Guangzhou airport, in the industrial hub of Huadu, the Foison Golf Club is a private club establishment with 36 holes laid across its compact tree-lined property. The Dye Course was designed by Cynthia Dye in 2012 while the older Course is a Nelson & Haworth effort from 2010.

Despite the pick of the land here and occupying the more usable part of the property, the Nelson Haworth course at Foison is tremendously disappointing, particularly when compared to the Dye Course next door. While the site is hardly pancake flat, it doesn’t fall or rise quite as steeply, nor is the routing squeezed as tightly, as on the Dye course. Some of the holes, however, are so crazy narrow that it’s really hard to take this layout seriously.

After a couple of nondescript openers the rising, twisting par five 3rd is a really exciting hole and sadly about the only genuine highlight here. The 4th and 5th are then inexcusably narrow, and arguably should never have been built. The 4th is a mid-length par four where you probably need to hit a 6 or 7 iron from the tee in order to keep your ball from falling off the tiny fairway ledge. The approach is then straight up to the peak of a narrow bluff. The par five 5th is similarly poor, its tee shot played from almost on top of Huadu city over a wild canyon to a fairway that narrows as the landform passes through converging hills and falls sharply away. The green site here is well done but the first two-thirds are inexcusably awkward and penal. The only other remaining front nine hole of note is the peninsula par three 8th, which is somewhat cliché but reasonably well built.

The back nine has problems too, but there are a few decent holes like the flattish par four 10th and the 18th with its green set to the left of a pond and to the right of a nicely positioned clubhouse. In terms of where it rates against other Nelson Haworth courses in the region, Foison is not a patch on Genzon A, but marginally better than Genzon B. This really is middle ground for Nelson Haworth, which will hardly excite those familiar with this firms other work in Asia.

None of the golf at Foison reaches any great heights, which isn’t surprising given the site and the lack of available space. The clubhouse though is nicely done and has a pleasant golfing ambience, which considering the industrial setting is quite an achievement. 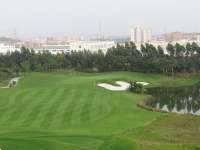 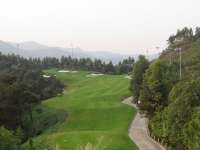 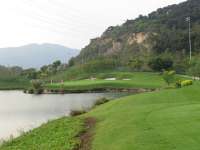 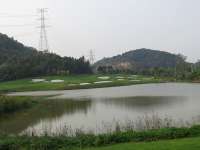