Developed by a company associated with Mr. Li Ka-shing, said to be Asia’s wealthiest man, the exclusive Harbour Plaza Golf Club is a 27-hole complex that occupies an attractive stretch of countryside south of Dongguan. Wedged between the vast Hwang Gang Lake and a series of hills and lychee plantations, the three nine hole loops were all designed by Robert Trent Jones Junior in association with his lead designer at the time Don Knott.

As one would expect from a course of this vintage, there are plenty of water hazards and lots of internal shaping at Harbour Plaza, but also a number of really fine golf holes. Oddly those down closest to the natural lake are among the least impressive, as it’s really the broad internal ground contours as much as the manufactured lakes and playing corridors that mark this as a quality golf experience. Across the entire 27 holes just a handful underwhelm, and these could all be easily fixed with some remedial design work or a little tree thinning.

Of the three nines here, two are arranged in anti-clockwise loops out and back from the clubhouse while the middle nine runs clockwise along the eastern perimeter. All three are very solid, but the opening nine stands out for the sheer scale of the terrain and the variety and quality of its green settings. As mentioned, the holes nearest the lake are ineffective but the golf on either side of the 4th and 5th is of the highest quality. Set atop a nice, natural spur the opening green sets the tone for the fun ahead and is a difficult target to get an accurate gauge of distance on. The same is true of the fiercely angled 3rd hole, a true Redan shaped par three leaning aggressively to the left and partly hidden beyond a pair of deep bunkers.

Each of the final three holes is equally impressive. The 7th is a straightaway par five that kinks slightly toward a green perched beautifully atop a small rise. The approach here is sensibly open, to allow skillful players to bring their balls in from the higher right side. The green on the gently rising 8th is even better. Wrapped around a central bunker, the target this time sits atop a ridge, but with a sharp false front and a vertical tier running thorough the putting surface cutting the effective pinnable area into two. Concluding a fine stretch of golf, the 9th is then a terrific par four that turns left around a large fairway bunker before heading over both a creek and an intimidating trap.

Across the remaining nines are a number of tremendous holes that feature similarly demanding green complexes and strong bunkering. The best tend to be those where the targets have been pushed up and fortified with sharp tiers and contours, or protected by deep traps cut into the natural slopes. Complimenting some fine design work are a stunning collection of Banyan and Lychee trees, as well as flowering plants dotted across each of the nines. Some of the trees have actually been planted right on the edges of the fairways, but most are well set back and provide a pleasant distraction to the actual golf.

Beyond the quality of the individual holes at Harbour Plaza, lies that hard to quantify element that all the best private golf clubs seem able to capture. There is an aura here, an unmistakable air of excellence and exclusivity that somehow elevates the golf experience. Those who are able to play here on a regular basis are indeed fortunate. 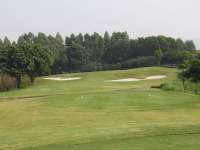 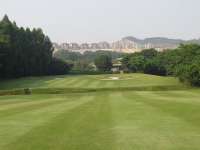 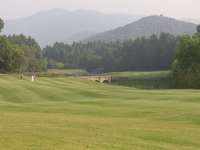 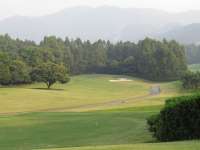