Originally designed by Nicklaus Design, the Yangtze Dunes course at Lanhai International Country Club was overhauled by the Australian design team of Ogilvy, Clayton, Cocking & Mead (OCCM) and reopened in 2018.

Unusually for China, the designers removed 8km of concrete cart paths and went for a more linksy look and feel at Yangste Dunes. Walking only, the course features vast areas of short grass, expansive bunkering and undulating fairways across the layout.

The club itself is located on Chongming, an island within the Yangtze River delta close to Shanghai. It was an almost ideal sandy base that encouraged the designers to take the bouncy, linksy route with their design, and certainly the course is dramatic and different for the region.

Co-designer Ashley Mead says of the project, “The mere fact that we’ve created a true links track at Yangtze Dunes makes it stand out from nearly every golf course that currently exists in Asia. For whatever reason -- cultural or climatic -- Asian developers have not chosen to build many courses in the links tradition.”

“As a firm, we’re deeply committed to designing golf courses that represent the local environment. And here’s a relevant fact: Chongming is the largest alluvial island in the world --alluvial being a fancy way of describing sand islands formed by river currents. So, we’re in China, on a giant sand bar in the middle of the mighty Yangtze River, just northeast of Shanghai, in the shadow of the towering Yangtze River Bridge. This site was crying out for a full-on links and we’re very pleased Yangtze Dunes so strongly accentuates this place and culture.” 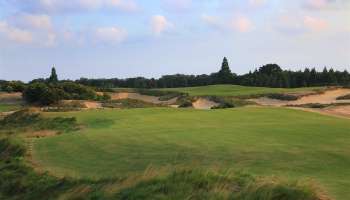