The tenth, and perhaps most ambitious, course at Mission Hills in Haikou, Shadow Dunes is a concept course that involved dumping large piles of dirt onto lava rock and shaping it to appear as though it is a natural seaside dune setting. To designer Brian Curley’s credit, the dunes are reasonably well shaped here, and the rippled fairways and heaving greens are mostly well formed. On the negative side, are a few overly manufactured putting complexes and the fact that keeping the ball on the ground in semi-tropical Haikou is unlikely to ever be your optimum mode of attack.

Shadow Dunes starts with a couple of fairly cool looking dogleg par fours, the 2nd with a mammoth green built beyond a ridge and falling toward its centre from both the front and back. Like most greens here, this one is very large and can be fun to hit into and putt and chip around. By contrast, some of the other putting shapes are a little exaggerated and don’t always match the peripheral areas. This would be less a problem were the design not so audacious. The 5th hole, for instance, ends in a triple green that measures more than 40,000 square feet, but works far better for both the 7th and 13th holes than the 5th. The 13th, in particular, is a fine hole that some will dismiss because of the size of its green, but in isolation its contours work well with the shot demanded from back on the tee.

Aside from a triple-tier green, the course is also destined to be remembered for a rather weird par five at the 4th, which features a split, longer-route fairway for not the timid, but instead the strong and adventurous. Unlike most split fairway par fives, that offer genuine strategies of play from the tee, this one has an alternate and unseen area for the second shot way to the left of a central dune that most players will simply play across.

On the positive side, again Curley’s par threes are strong, especially the 3rd and 13th, and his final two green complexes are especially attractive to play. The quality of the shaping work, considering the whole layout was built in just three months, is also to be commended.

Like The Vintage course at Mission Hills, conceptually Shadow Dunes is a wonderful contrast to the other golf available at the resort, and the look and style of this layout should have been enough to distinguish it from all the others. It didn’t need crazy holes, and though it will definitely mature and improve over time, had the design team been given a little more time to work on the fine details there is no doubt Shadow Dunes could have been another star attraction here. As it stands, most golfers will love this course and the fun of playing linksy, dunesy golf among a tropical lava field is hard to ignore. 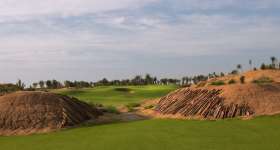 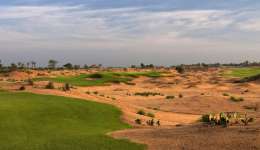