Given Curley had to come up with ten different golf courses and golf concepts, it seemed inevitable that one track would be styled after the work of American legend Pete Dye, a one-time mentor of both Lee Schmidt and Brian Curley. Stone Quarry is the Dye-inspired track, and a polarizing test that a certain demographic will embrace while others look upon with contempt. On the positive side, the emphasis here is clearly on fun and sportiness. Whether it’s the six par threes or the fact that the course boasts more exciting, though, manageable carries than elsewhere, even the harshest critic will have to acknowledge that this is a pretty enjoyable place to golf.

Individual highlights on the front nine include the strong par three 2nd, running alongside a sleepered wall, the expansive fortified bunker fronting the 5th green, the quirky mid-length 6th with its quasi-Church Pews and the impressive all-carry 8th.  On the back nine, the standout holes are clearly the cool par threes, from the gorgeous 11th, with its sweeping sleepered bunkers, to the quarry-carry 15th and the short and dangerously perched 17th.

The most memorable feature on this side, however, is the triple-decker volcanic bunker and elongated double green on the short par four 13th, which not only looks bizarre but plays bizarrely. The protruding hazard rises beyond the left side of a seriously wide twisted putting surface, leaving the player more likely to be confused by its existence than challenged by its presence.

Stone Quarry is by no means a great course, and in fact the use of railway sleepers within the design and across the periphery areas is so overdone as to become a little tiresome. What it does have in its favour is excitement and a clear point of difference from the other layouts on the property. It’s a good course, but the best Pete Dye tribute Mission Hills have created is the one at the Shenzhen resort. 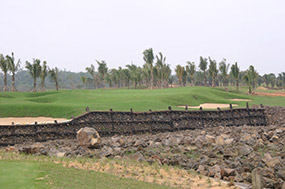 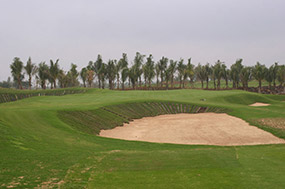 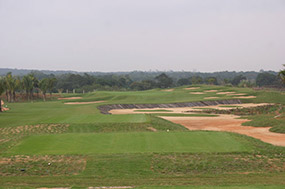 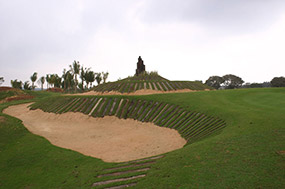