Behind tournament tests such as Lava Fields and Blackstone, the next most impressive course is The Vintage, a quasi-Seth Raynor/C.B. Macdonald tribute layout complete with Merion-style wicker basket flags. This is supposed to represent classic, turn-of-the-last-century American golf, and for the most part it works well. The replica greens and holes are effective, and subtly different to the versions that Raynor and Macdonald famously created. An example is the Biarritz green on the 2nd, which is noticeably skinnier than those built by Raynor and his mentor. Elsewhere large, geometric grass-faced bunkers protect pushed-up putting targets that feature plenty of steep slopes and tiers.

The opening hole, and its charming plateau green, is the perfect introduction to a course with plenty of charm and quality. Other favoured holes include heavily undulating par fours like the 5th, 6th and 7th, the strategically turning mid-length 14th and the series of gorgeous back nine par threes, such as the angled drop-kick 10th and the delicious all-carry 17th with its charming built-up green complex. There are also a stack of really fine approach shot situations across the layout.

On the down side, this course has a couple of really goofy bunkers and one hole, the 9th, that sadly takes some of the shine off what is a mostly terrific test of golf. The 9th is a reachable par five with a donut green and a series of shallow sand furrows hidden within its softly rippling fairway. The 3rd, 4th and 12th are other par fives with unsightly fairway bunkering, but these holes make much more sense strategically than the 9th.

Given the general quality of this golf course, and the fact there is enough quirk and wackiness on other layouts at Mission Hills Haikou, it’s disappointing that one hole could potentially spoil the round for discerning players. Much of the remaining course is terrific, however, and while the designer chose to pay tribute to a bygone era, pleasingly he didn’t just copy holes from abroad but instead created originals using a style and philosophy that were common a century ago. Were it not for the 9th hole, and the occasional snaking mound and volcanic shaped bunker this would be much better and easily rank among China’s finest ten or so courses. 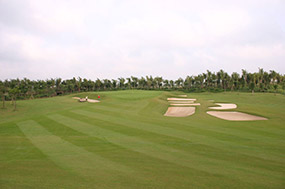 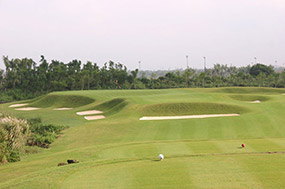 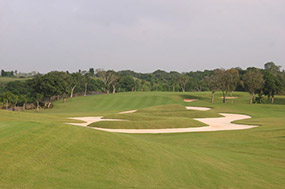