Situated an hour northwest of Beijing, and close to both the Great Wall of China and the famous Ming Tombs, the Reingwood Pine Valley Golf Club was developed by billionaire businessman Dr. Chanchai Ruayrungruang, the distributor of Red Bull energy drinks in China. From the name and invitation only membership structure, to the design style and designer, through to the 5-star lodging and replica White House Presidential Hotel, everything about Reignwood Pine Valley is Americanized. It holds far more appeal, therefore, for those unfamiliar with the luxury, lush playing surfaces and top-shelf service experienced at elite American private clubs.

There are two full-length courses at Reignwood Pine Valley, the older Jack Nicklaus Signature Course and the newer Golden Bear Course, designed by Jack Nicklaus in collaboration with his son Jack Junior. The newer course is a very decent layout, but we have been disappointed by the fact that since opening in 2006 it has been redesigned a couple of times, as bunker flavors change and the Nicklaus team decide they can improve upon their original, and subsequent, efforts. Forget Dr Alister MacKenzie’s mantra of seeking ‘finality in design’, here Nicklaus Design has been given a green light to design, redesign and redesign again. Even the older Signature Course has been given a makeover, despite its relative youth.

Constant change aside, both courses here are good and certainly toward the higher end of what’s available in the Beijing area. While the original Signature Course has a very clean, modern style, the most recent bunkering changes to the Golden Bear Course have elevated its aesthetic appeal, via a preference for more rugged shapes as opposed to the former pristine, symmetrical shapes of the original design. Some of the large sprawling traps are especially effective. The fact both Nicklaus courses now have a point of difference is a positive, we would simply argue that striving for variety in golf is not a new thing and that time and money was wasted getting Reignwood Pine Valley to this point.

The tournament pedigree of the Signature Course ensures it remains more popular among local members and guests, but we feel the Golden Bear Course slightly shades its older sibling. Don't expect either to rival the real Pine Valley in New Jersey, but for China and for expensive modern golf clubs in Asia, this one isn't too bad. 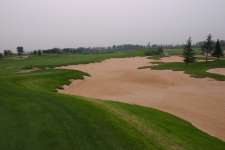 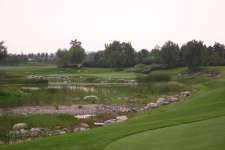