Bringing the most sophisticated design team in golf to arguably the least sophisticated market in the world was always going to be a fascinating experiment, and so it proved with the Shanqin Bay development on China’s Hainan Island.

Developed by the CITIC group, Shanqin Bay was the brainchild of former Chairman Wang Jun, who first discovered the site back in 2004 while searching the island’s southeast coast for suitable golf land. Keen to establish an exclusive high-end golfing enclave, Chairman Wang flew up and down the coastline in a helicopter looking for something magical. He found it south of Bo’ao, on a vast pineapple plantation set right against the spectacular waters of the South China Sea. With its own beachfront, constant sea views, dramatic elevation changes and high rocky bluffs this was as beautiful a virgin site as any uncovered in Asia. It was also a site with great difficulties, and the Chairman was acutely aware that to create the world-class golf course he wanted he would need to engage a world-class golf course designer. He needed Bill Coore.

Initially reluctant to travel to China, Coore eventually made the trip and his first impression upon inspecting the land was to question whether a golf course could even be built there. It wasn’t until his sixth or seventh day walking the site that he uncovered a circulation pattern that made any sense, and one that would allow for the severe elevation to be used primarily on the downhill holes. Coore had a routing plan, and Chairman Wang his preferred golf course architect.

Coore’s routing scheme was one of the keys to making Shanqin Bay work. The other was a client who approved the plan, and allowed the design team to build an unconventional course with huge playing areas, very little rough, blind shots and three closing short par fours. Throwing the rule book out the window on such dramatic terrain is the only way to create quality golf, and the developer deserves a great deal of credit for allowing his designer to build the holes and sequences he wanted. If only other designers in China were so lucky.

It needs to be noted here, that while western golfers are likely to enjoy and understand this place more than the locals, it’s probably not what most have in mind when they imagine a Bill Coore course in China. For a start there is a large irrigation lake in the middle of the main property, and an entrance road cutting across the 13th hole. There are also areas where mounding has been added to protect stray shots from violently collapsing terrain or to push jungle bound balls back into play.

Perhaps most notably, unlike other Coore & Crenshaw layouts this is not the sort of golf course that lends itself easily to repeat play. The holes are certainly fun, but the wind can be very stiff here and the terrain is so steep that only the fittest, or keenest, golfers will feel like heading back to the 1st tee after walking off the 18th green. For the rest, a relaxing drink in Shanqin’s palatial clubhouse is likely to prove a more appealing option.

None of this is a knock on the design work but instead a feature of the terrain at Coore’s disposal. The Shanqin site is perhaps best described as Kapalua meets Cape Kidnappers, with a little Barnbougle Lost Farm thrown in for good measure. Were it not for his routing patience and design diligence the place would have been unwalkable and next to unplayable.

Aesthetically Shanqin Bay makes a bold statement. Beyond the glorious sea views and dramatic cliffs, the most striking aspect of the course is the sheer scale of the topography along with the enormous playing corridors, the use of native jungle vegetation and lack of continuous cart paths, which is highly unusual for China. The scraggy bunkering is another feature, Coore’s crew working wonders across the property and manipulating even the difficult areas into holes of genuine beauty. While hard not to gush over the seaside golf, the entire course is full of real quality.

The fun at Shanqin begins at the broad, undulating opener and continues onto the par five 2nd, played initially across a bunkered crest and along an old stone wall. The last half of the fairway tumbles toward the sea and along a narrowing plateau split by a large central bunker. Even those who dislike the semiblind aspects of the 2nd hole, are likely to forgive its sins for having brought them to the wonderful par three 3rd. Rightly or wrongly, coastal courses are often measured by their short holes and those at Shanqin are superb. It’s not just the ocean backdrops at the 3rd and the 8th that warrant acclaim, but the overall balance and diversity of short holes that test the full range of a golfer’s skill.

If brilliant par threes weren’t enough to satisfy the discerning golfer, Shanqin Bay also houses a unique set of closing short par fours. The 16th and 18th are both driveable under favorable conditions while the longer 17th, which pushes 360 yards from the tips, drops steeply off a towering bluff and literally plays alongside the South China Sea. Falling even further, the 16th features a green that can be approached safely from the lay-up zones, but screams to be attacked from the tee given its generous side-door entrance. 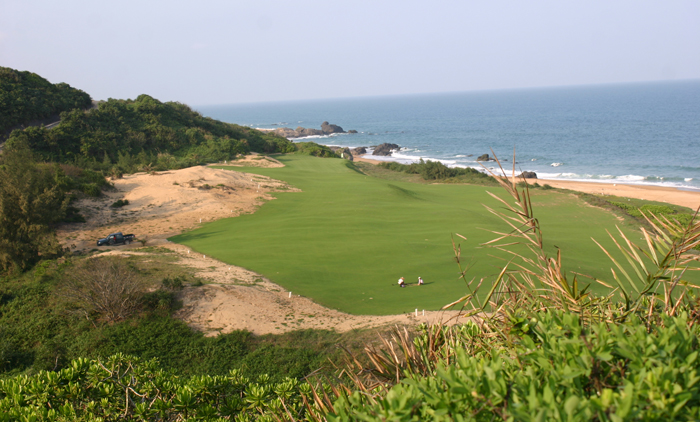 Above - the beachside par four 17th

Not to be outdone, most of the longer holes are also first-class. The most dramatic is the cliffside 15th, which stretches 460 yards and features both panoramic ocean views and a strategic simplicity that forces drives to be hit close to the fairway bunkers. Other highlights include the beautifully bunkered par five 13th and the adjacent par four 6th and 7th holes, whose greens are open to encourage an approach bouncing in from the higher side. Chinese golfers unable to visualize creative shots along the ground will find both holes difficult.

Such golfers are likely to have even bigger issues at the 5th, a Cape/Alps-style par four played diagonally across the main irrigation lake and then blindly over a large, scrubby dune to an unseen green falling away from play. Rare for China, this hole is as foreign to local golfers as Moutai and Mutton Stew are to those from the West.

As far from the standardized, clichéd modern championship-length course as you will find in Asia, Shanqin Bay proves yet again that great golf comes in all shapes and sizes, and on all sorts of sites. Few architects have the ability to turn such hostile ground into memorable Top 100 golf, but Bill Coore does and thankfully his client on this project was wise enough to allow him the freedom needed to create his masterpiece. The only disappointment with Shanqin is that so few will ever get to experience it. Were this course accessible to more golfers, it would unquestionably rank as one of the world’s most important. 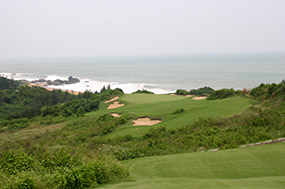 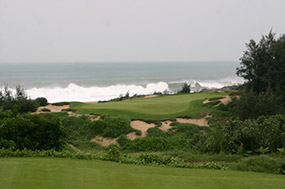 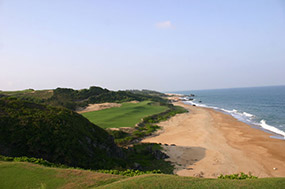 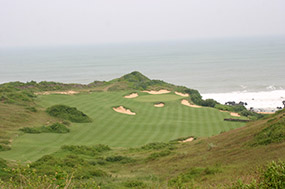