The Stone Forest International Country Club is a 54-hole facility built beside the world heritage listed Stone Forest National Park, an hour east of Kunming. This area, in Yunnan Province, is internationally significant for the prehistoric monolithic remnant stones and boulders that dot the landscape and stretch as far as the eye can see.  For architect Brian Curley the demands of this project were substantial. Aside from all the rock on site, there were large areas where blasting was prohibited, so huge chunks of rock had to be either jack-hammered by hand or somehow incorporated into the various routings. The resultant mix of open golf areas and holes within the rock are, at times, a touch awkward but Curley did well to design as many interesting holes here as he did and to make sure that each course was not only blessed with plenty of eye-candy, but also built with its own distinctive personality.

The B Course at Stone Forest is intended to be open for public access, as well as member play. As a point of difference to A and C it is slightly less strenuous and also features white sand in the bunkers. The downhill short par four opening hole sets the tone for the round, with a number of blinding bunkers lining the side of its fairway. The 2nd is a more strategic test, and allows players to gamble by flirting with a waste area down the left hand side in order to get closer to the green from the tee. From the 3rd the golf escapes the stone for a period, and players get to enjoy solid holes like the par four 3rd, with its pushed-up green and the angled par three 5th.

On the back nine another stretch of holes away from the rock stands out. The sweeping left 12th is a fantastic par four, with an exciting uphill approach played either side of a distinctive twisted pine in the middle of the fairway. The next is a quite sinister par four with a sharply angled green and a nasty false front to catch those hitting beyond a massive front bunker. Save for a couple of areas where the golf gets a little steep, the rest of the holes are solid, if unspectacular, and generally good fun to play.

At Stone Forest Brian Curley succeeded in building three solid golf courses for a client who demanded 54 original holes, as well as an enormous practice facility, high-end residential subdivisions and two giant clubhouses – and he needed all the golf completed within two years. This is far from an ideal site for golf, but Stone Forest is a cool experience and there are enough fun holes across the property to ensure it establishes itself prominently within Chinese golfing circles. 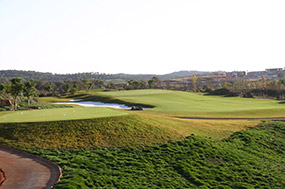 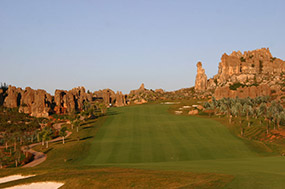 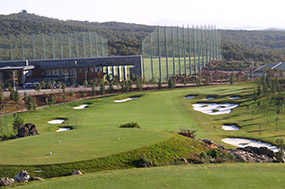 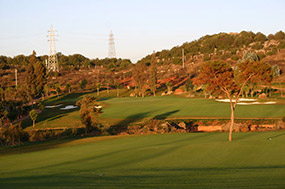