Although all three courses at Stone Forest appear to share similar topography, there is a nice contrast between them. The Yufeng Ridge Course is the most rugged of the three, and also the steepest. It was designated by the original developer to be the club’s championship test. In places the golf here is quite bruising, and the layout would be difficult to walk given some long transitions between greens and tees.

Though difficult, Yufeng Ridge is nonetheless exciting to play. The steep elevation changes, together with the fact that you are more than a mile above sea level, gives golfers the opportunity to bomb huge drives and renders some of the longer holes more manageable. Interestingly, there is a deliberate rustic edge to this course with a dirtier grey sand used in the bunkers and peripheral zones complete with areas of red clay and tall, off-color fescue grasses. The extending of these grasses into bunker edges is quite effective, and the overall naturalistic tone ensures that the manufactured hazards do not overwhelm the beauty of the remnant rock formations.

Where the Leaders’ Peak course is more contained and intimate, the sense here on Yufeng Ridge is of a more expansive course with wider panoramic views. The opening hole sets the tone, and looks not only across a number of nearby fairways but seemingly endless acres of exposed rubble and rock. Like many holes on this course, the playing areas are quite broad but those who stray too far are almost certain to find scratches on their Titleist.

Among the standout holes on the front nine are strong fours like the 2nd and 3rd, and the gorgeous two-shot 8th, which sweeps left and seemingly straight into the stone forest itself. The par three 7th is another beautiful hole, and effective for a simple angled green site and single pot bunker that guards its frontal portion. Golf architects in China should build more short holes like it.

Back nine highlights include the twice-twisting par five 11th and the steeply pitched mid-length 15th, which bends around the shoulder of a hill and into a tiered, angled green that is one of the most severe on the golf course. The most memorable hole, however, is the par five finisher, which drops sharply off a ridge to a fairway split by a large cluster of boulders. Those who successfully play to the more dangerous right side here are given an opportunity to play around a dam that guards the front of the green and try to bounce their ball on for two.

Although not quite in the same class as the Leaders’ Peak course, Yufeng Ridge provides a nice contrast to the other golf available at Stone Forest. Whether it’s the continued integration of rock and limestone into the golf holes, or the use of alternate features like dramatic ridges and a dry meandering creek, there is enough quality across this layout to satisfy most visiting golfers. 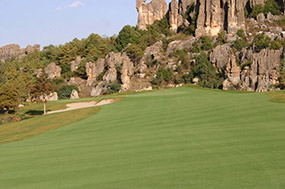 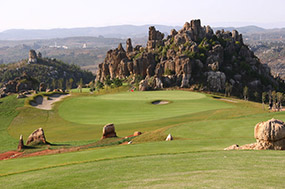 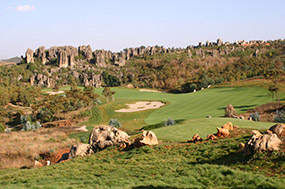 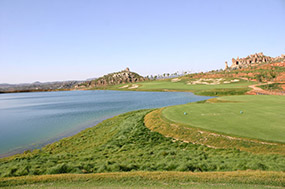