When the Chinese Central Government decided to crack down on illegal golf course construction, the as-yet unopened Sunshine Hills course outside Kunming found itself well and truly in the firing line. Here was a course built right on the edge of Yunnan Province’s sparkling Fuxian Lake, the second deepest freshwater lake in China and famous for an ancient underwater city discovered less than 20 years ago. The lake is also home to a Chinese naval operation, which at one point during construction fired a missile right onto the 15th tee pad. The missile was recovered and construction continued, until the course was ready to open at which point the government decided to close it down. We understand that despite being finished in 2013, Sunshine Hills remains unopened.

Should the course ever open for member play or green fee access, what golfers will find here is a dramatic layout with steep elevation changes and stunning views across the beautiful lake. The back nine gets right down alongside the water, and was a significant engineering achievement given a million cubic yards of material was moved to create what appear to be very natural golf holes. The front nine was even more severe, and required considerably more material to build. These early holes occupy an elevated hillside that really had no business being a golf site, but was blasted, excavated and bulldozed into a somewhat interesting golf experience.

Across the site there is in excess of 200m of elevation change, from the higher front nine holes down to the 14th and 15th beside the lake. There is no way to make such a severe site walkable and circular, so instead Curley set golfers off from a midway point up the hillside, and has them finishing down against the lake. It’s an unconventional routing in many aspects, but a sensible way to handle terrain when you are able to easily transport golfers from arrival up to the opening tee.

On the front side the early holes transition quite gently, but things get more difficult as they get steeper and the holes get longer. The best bits are probably early on, and include the 1st green, with its infinity aspect, and the strong par four 3rd, which sits atop a ridge.

Without doubt, however, the highlight at Sunshine Hills is the lakeside back nine, which starts with a terrific green site at the 10th and a beautiful par three at the 11th, right down against the water. Even the somewhat awkward 12th and 13th holes are elevated by high quality green sites that create all manner of options and temptation.

Most memorable are the strong 15th and 18th holes, which run right along the lakeshore. The par four 15th must be one of the toughest holes in Yunnan, as it demands a precise drive followed by an uphill, sidehill approach with breathing room left but death to the right. The approach here resembles the tee shot on the famous par three 10th hole at Spring City Lake. The longer 18th hole is equally dramatic and although a touch over-bunkered on its safer side, is unquestionably one of the premier closers in China.

It will be interesting to follow developments in China over the coming period, to see whether this course ever opens, and what golfers make of its dramatic views and severe elevation changes. We plan to post an update on Planet Golf should its status change. 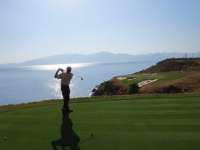 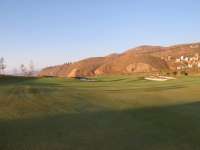 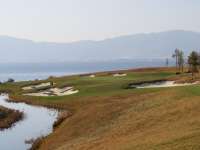 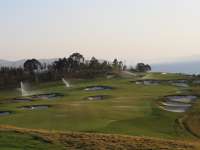 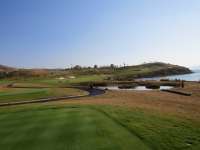