Opening two years after the West, the East Course at Shenzhou Peninsula continues along a similar theme with high quality holes routed amongst an unobtrusive housing development and briefly touching the beach. The bunkering is similarly dramatic, and abundant, while the fairways are mostly flat but set between aggressively shaped peripheral areas. The most effective holes are those where the larger undulations have leached into the fairways, and bunkers or sandy wastes have been built into their slopes. The best example is the very first hole, a terrific mid-length par four with a central bunker dictating strategy and cut attractively into a soft rise. The positioning of the green beside an adjacent ridge here forces those who want a clear approach shot to flirt with danger off the tee.

The rest of the East Course is noted for its similarly bold bunkering style, its pleasant sea views and impeccable turf conditioning. The routing itself changes direction more frequently than the West, which is a positive thing on a windy site, but there are fewer beachside holes. The only one that runs directly alongside the sea is the par five 16th, which has the beach all down its left side, bunkers down its right and an elevated green complex set beneath a cluster of large boulders. For photographers this is a dream come true, and for golfers a hole that’s both intimidating and enjoyable.

Other highlight holes on the East Course include the strong par four 2nd, which features a terrific diagonal drive across a marshy wetland, and the short par three 6th, whose green is set down in a shallow glade and partly obscured by a series of bunkers and formidable rocks. The previous green is also framed by rock, and quite memorable.

Equally pleasing are the quality holes built by Weiskopf and his team away from the sea and the stones. The 7th, for example, is a straight, rising par four with a skyline green perched delicately atop a sand dune saddle. The peninsula par three 10th is also very good, its nicely contoured target cut into a lake and shaped to allow golfers to use its slopes in order to feed balls toward dangerous water-side pins.

Even better are consecutive blind areas at the 13th and 14th, highly unconventional and almost unheard of in China. Although neither is totally blind, the approach shot into the 13th and the tee shot on the 14th are played across large, manmade sandy dunes into landing areas that are only partly visible. These are precisely the sorts of exciting, linkslike shots that this property needed and the designers deserve credit for incorporating such sportiness into their layout. Less effective is the elevated short par four 17th, which heads back inland from the rocks and is so heavily bunkered as to dictate the playing strategy for most sensible golfers.

Weiskopf and his designers were naturally delighted to have been given the opportunity to build here at Shenzhou Peninsula, and to not have the sorts of environmental restrictions that might have prevented similar development elsewhere in the world. Certainly pushing fairways right onto the beach is a rare privilege, and almost unheard of in this day and age. Although neither course is an authentic links, Shenzhou Peninsula is an exciting coastal experience nonetheless and about as much fun as the public course golfer can currently have in China. 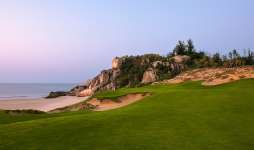 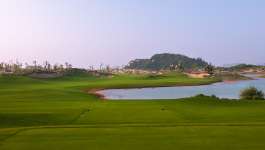 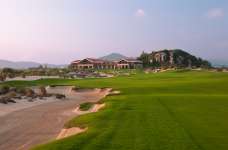