Yalong Bay Golf Club is a highly regarded but hugely disappointing resort course on the tropical Chinese holiday island of Hainan. The course is set only a couple of hundred yards from the sea, and built on nice sandy ground, but the design team at Robert Trent Jones II failed to uncover a single interesting hole here. Indeed it seems hard to believe that the same company that created the Lake Course at Spring City could produce something so insipid, herein lies the pitfalls of signature design.

Unlike the Lake Course, the shaping at Yalong Bay is basic and quite unattractive, the design also lacks quality and there are several glaring issues of concern. Chief among them is the driving lines and landing zones for good players. In order to prevent players hitting down dangerous and unplanned avenues trees had to be planted after opening, while fairways have also been artificially narrowed to make the course seem more challenging for decent golfers. At times fairway bunkers are now a good twenty yards inside the rough lines. Were it not for the rough grass driving would be very generous, and the problem here is that all of the Trent Jones Junior crew’s shaping was done on peripheral areas so the actual landing areas themselves are rather flat and dull. The 1980s mounding employed down the sides of holes and around the bunkering is both unappealing and overdone.

As for the specific holes, the two short fours are a complete doddle for good players with no real options presented from the tee, while the par threes are strangely dull considering how much earth was pushed around during construction. Of the longer holes, the two around the lake are ripped straight from the cliché resort design copybook and only dramatic to those who haven’t played much golf off Hainan Island. The split-fairway 16th, for example, is actually quite poor. The hole encourages a drive down the right to perhaps attack the green on your second shot, but if you are unable to make the water-carry you have to play at least 90 degrees away to the left and then hit your third across water to the shallow part of the green. It’s all or nothing, and might be fun to play if you can hit two bombs but for the rest there are no strategic challenges presented here.

A huge clubhouse and the never-used course floodlights point to the excesses of an over-eager developer here. Sad, but the nearby beach and luxury hotels in the area are terrific, and this could have been a great golf experience had a little bit more little care and attention been given to the prized asset at any golf development, the course itself. 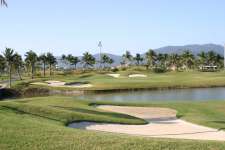 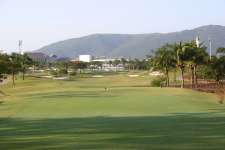