With tight lies and uneven stances on the close cropped undulating fairways and greens that have beautiful quick surfaces, with both severe and subtle borrows the course offers golfers of all levels a challenging and enjoyable experience.

Founded as North Cornwall Golf Club in 1891 the club was originally intended for the exclusive use of the officer class incomers and local gentry with the exclusion of the local townsfolk. An exception to this rule was made for open champion Harry Vardon when visiting the club in 1905, 1907 and 1909. The last visit saw Harry reduce his own course record from 69 to 65.

The growing demand for locals to play the game resulted in the formation of an artisan section in 1919 called Bude Town Golf Club. These artisan members carried out work on the course and were not admitted to the clubhouse and had restricted playing rights. From 1949, North Cornwall Golf Club and Bude Town Golf Club merged to found the present club.

The idea for a golf course at Bude appears to have been formed in the minds of young, affluent professionals who were drawn to Bude as holiday visitors in the late nineteenth century. Cricket and tennis was already being played in the town and the addition of a golf club would have provided a further attraction. The clergy as well as lawyers particularly seemed to find the summer sports at Bude attractive. It is quite likely that some were renewing friendships formed at university in earlier years.

The early minute books of the club have been lost but there is evidence to suggest that the club was inaugurated in 1890 as the Bude Golf Club. The original golf course at Bude consisted of nine holes and remained the same for the first two years. The Exeter and Plymouth Gazette of Friday 28th August 1891 reported that the greens were all levelled and re-laid during the previous winter and “are now well established.”

Evidence relating to the original architect of the course is not conclusive but almost certainly it was Tom Dunn. An historical description of Bude Links, written in May 1921 and included in the Western Morning News, states that Tom Dunn laid out the original course. This view is supported by Cornish and Whitten in their seminal work on golf architecture The Golf Course (1981). Tom Dunn (1849-1902) came from a family steeped in golf history. His father, ‘Old Willie’ Dunn was from Musselburgh and had played challenge matches against Allan Robertson and Old Tom Morris. Tom Dunn was born at Royal Blackheath where his father became greenkeeper and professional. Tom became a professional himself at the London Scottish Golf Club at Wimbledon in 1870. Tom became the most prolific golf course designer of his day laying out many courses, particularly during the 1890s. 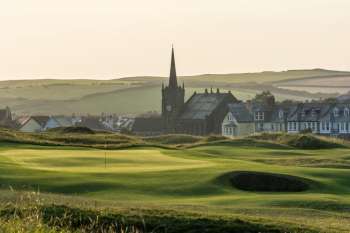