Located on a triangle of linksland in the small town of Hoylake, the Royal Liverpool Golf Club owns the second oldest links in England and started life in 1869 on the racecourse of a local hunt club. Its first course was a nine-hole layout designed by Robert Chambers and George Morris, the brother of Old Tom, which was extended in 1871 to eighteen holes and then reshaped by Harry Colt during the 1920’s. Colt’s work was substantial and included the building of brilliant new greens at the 8th and 12th, an entirely new 13th hole and making major changes to the 11th, 16th and 17th holes.

Aside from its outstanding links, the club also has a significant tournament history having hosted the first Amateur Championship and both the first international match between England and Scotland, and the first between Great Britain and the United States, for what is now known as the Walker Cup. More recently Donald Steele lengthened the course in preparation for the 2006 Open Championship, held at Hoylake after an absence of almost forty years. Aside from stretching the course well beyond 7,000 yards, his changes involved numerous new tees and bunkers, and an all-new 18th hole. He also rebuilt several greens, sadly including the once fearsome 17th, which like the 7th formerly had an out of bounds area hard up against its putting surface. The modern Hoylake is therefore made up of original hunt club holes, a handful by committee’s, several Colt greens and numerous new Steele additions, yet it somehow manages to remain coherent and very true to the spirit of the original design.

The links is mostly built across a flat and fairly bleak sandy plain, its primary defense being the strong winds which blow across from the Dee Estuary and the firm and fast conditions its tight turf provides. Holes are not overly bunkered but each hazard is extremely punishing and cleverly positioned to catch those who stray, while the greens are arranged in such a manner as to insist that those hoping to score well attempt a variety of approach shots. The round starts into the prevailing winds with one of the most intimidating openers in golf, the fairway bending at right angles around a practice paddock with out of bounds down both sides. It is followed by a beautifully bunkered short four that can be played long or short from the tee, depending on your bravery, but has an away sloping green that is tricky to hold from off the short grass.

Next up is a series of solid holes that lead to Colt’s corner, a stretch of golf from the 8th through to the 13th played across the most significant sand formations on the site and enjoying the bulk of Colt’s remaining design features. The par three 11th is a great hole that looks out over the barren mudflats of the estuary, while of the longer holes difficult fours at 10 and 12 are very good, as is the par five 8th with its terrific raised green protected by a single gathering bunker. Typical of Hoylake, this hole punishes those unable to thread the ball into a seemingly vast chase-in area that is actually deceptively tight. The bowl green on the 9th, sweeping par four 12th and beautifully bunkered short 13th are further sandhill highlights before play moves onto the flatter plains for a demanding closing run defined by the three tough long holes from the 14th to the par five 16th. The 16th, which again skirts along the out of bounds practice ground, is successfully used as the closing hole for major events.

Rather than a string of world-class moments, Hoylake works best as a quality collection of strong holes linked together with impressive base features such as charismatic greens, deep and well positioned revetted pot bunkers and plenty of directional change. Despite its unmistakably classic feel, the course has evolved considerably to keep pace with the modern game. Although it continually strives to remain a relevant championship test, the club has very sensibly resisted over-bunkering its holes with the result being a stern links that challenges the great players yet remains both totally playable and utterly enjoyable for the mere mortals. 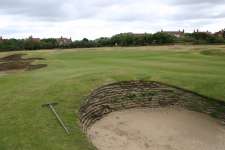 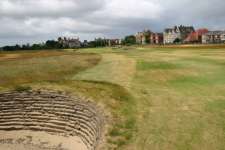 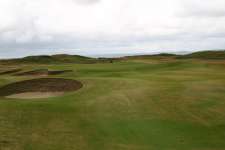 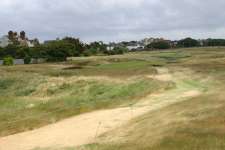