A much respected championship venue, the Royal Lytham & St Annes Golf Club was formed in 1886 when a Scottish schoolmaster, who had relocated to golf deprived North Lancashire, managed to convince the local gentry of St Annes to establish their own course. As interest in the game started increasing so too did the surrounding township and the club’s first links was repossessed for a housing development. An alternate site was found on the inland side of the town’s railway line and in 1898 the current course, designed by the club’s first professional George Lowe, was opened for play.

Almost immediately Royal Lytham focused on establishing its championship credentials and by 1919 had called in Harry Colt to strengthen the Lowe layout. Colt repositioned a number of greens and tees to give the course its current configuration. He also lengthened the holes and added numerous bunkers, a practice the club has vigorously continued over the years as it strives to remain a relevant test for leading professionals. Indeed, the overwhelming impression of the modern Lytham is a course which probably exists more successfully now as a championship venue than as an enjoyable members course, the links among the most challenging in England and certainly the most intimidating from the tee with its narrow fairways cramped by endless revetted bunkers and thick choking roughs.

The course itself is not particularly attractive as it is laid out across a flat field that doesn’t have sea views, shaggy dunes or tumbling fairways and is surrounded by housing to its north and a railway line along its south-western boundary. A relentless examination of your ability to hit straight shots, the test begins with a long par three opening hole surrounded by sand then moves onto a series of fine par fours, highlighted by the 3rd with a terrific green that drops away dramatically. Most of the outward holes are helped by the prevailing breezes, your approach to the difficult plateau 8th green a real standout, though made more demanding by its elevation and a wind pushing your ball toward the trouble. The closing stretch from the 14th is a terrifying run of tough par fours where finding short grass from the tee is quite an achievement but absolutely vital if hoping to post decent numbers. The final two holes, in particular, are unbelievably tight.

Possibly born out of its inability to initially test the world’s best players or the lack of any natural physical obstacles, Royal Lytham has continued to toughen its holes from decade to decade to the point where today’s links barely resemble the layout Lowe or Colt conceived. The course is now the sternest and most penal driving test imaginable, the holes so cramped and over-bunkered that unless you are striping the ball down the middle of every fairway you will strike sand and when you do the penalty is invariably severe.

The peerless Bernard Darwin once wrote of Royal Lytham, 'hit your ball to the right place and the way to the hole is open to you, but hit your ball to the wrong place and every kind of punishment, whether immediate or ultimate, will ensue'. This description of a strategic links seems no less appropriate today than it was in the 1930’s, its just that the accumulation of more than 200 bunkers has made the ‘right place’ even harder to find. 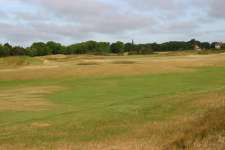